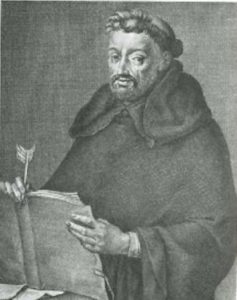 Jews in the Spain of the Middle Ages, though never popular, were permitted to convert from Judaism to Christianity; rigorous tests conducted by priests followed equally stern training. The ‘converts’ were called Conversos to define the essential difference between someone born and baptized Christian and a ‘convert’. In addition, they were sometimes called ‘New Christians’ to distinguish them from Old or Non-Semitic Christians. In popular speech they were often called Marranos which is vulgar Spanish for pigs. The correct term is Cerdo, but this word is also used by the Spanish to describe any male they happen to deprecate, probably with reason.

From around 1392 conversion became a regular event in public life, as anti-Semitic riots occurred in many major Spanish towns, accompanied by bloodshed. Many Jews chose to convert; others were forced to. Once they were Christian, they could take public office, a benevolent reform appreciated by the Jews, who often became an influential force in the running of towns and regions, the management of bishoprics, and even in the royal councils. To put it simply, converts, one they had converted, had arrived, though of course Jews had been living in Spain for centuries.

Unfortunately anti-Semitic feelings were always present, and the Conversos were suspected of continuing their Jewish religious practices, causing the establishment of the Spanish Inquisition (q.v. 1478) and the forced expulsion of all Jews in 1492. In England, after the Reformation and the establishment of the Protestant Church, Anglicans who converted to Catholicism were known as ‘Converts’, and were popularly suspected as becoming more Catholic than the Pope, especially by people who had been born Catholic.

In Spain, the Inquisition became powerful enough by 1480 to order the execution of thousands of Conversos, accused of practising Judaism in secret. This might have been true, but the concept also proved useful for people who wished conveniently to eliminate their enemies.

By the early 1600s, true Jews still following their judaic worship were naturally becoming a rarity, and it was popularly decided to accept Conversos into everyday Spanish life and custom. Many of the converted made eminent contributions to cultural life, such as the poet Luis de León.