Home/British History, English History, History of the Cinema, Scottish history, World History/Further thoughts on Edward I of England
Previous Next 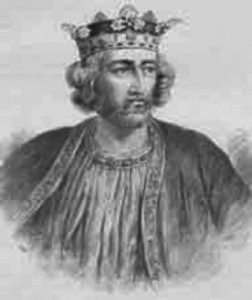 He collapsed and died as his servants tried to lift him out of a bed to eat something, but had been ill for many months, and was too weak even to hault himself out of bed. Later he tried and failed to get on his faithful old warhorse, much to the latter’s astonishment. But Edward, once tall, immensely strong, with dark blond locks and a fearsome temper (Plantagenet) – was now a shattered wreck. He was sixty-eight, and his courtiers could hardly recognise the great man and monarch he had been.

To worsen matters, his son the first Prince of Wales – Edward of Carnarfon – the future Edward II, though athletically inclined and a fine jouster, preferred the comforts of south England and the company of male favourites like the Gascon knight Piers Gaveston, whom his father had twice exiled, though he always returned to advise the young prince wrongly and infuriate the barons: they killed him in the end. It is a sad story, because the same barons who murdered Gaveston and two Despensers, father and son, combined with one of the Marcher lords, Mortimer and his mistress (the Queen) to murder Edward II too.

Throughout his life Edward, first as prince, then as king had been likened to a leapard and a lion; he was a builder of fantastic and almost impregnable castles; he had allowed the foreign-made cross-bow to replace the English bow and arrow. He had hammered the Welsh and the Scots, and frightened the wits out of French kings with his threats to take France. In this last case he failed because his barons refused to travel to a foreign country to engage in warfare when their king was busy elsewhere. Edward cursed them, subjected the Church to paralying taxes and fines, but still gained no support for his foreign excursions. 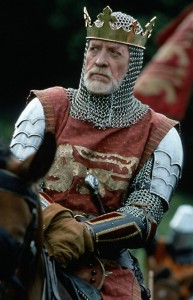 Best impression by an actor – MacGoohan as Edward / wearemoviegeeks.com

When he died Edward became a legend, rather like the actually legendary King Arthur, a Welsh king who had never existed, except in the minds of balladeers and poets. He did more to embellish and enhance the mastery and magnificence of the crown of Plantagenet than any other of his line except Henry II. His father Henry III had reigned a long time but achieved little, except the permanent enmity of a Parliament (of sorts). Edward established himself as master of the British Isles, as well as defending what was left of what had been a Plantagenet empire overseas, reduced to nothing by the inept policies of John I and his own father’s failings. He established rules of law, and punished corrupt officials. He almost became popular, even with his desperately over-taxed people and Church, by expelling the Jews. He averted civil war, even when his barons threatened another form of Magna Carta. But he nearly bankrupted the country for his incessant wars, and ruled with excessive barbarity and cruelty. When he died he left debts approaching what would now be 2 or 3 thousand million pounds. He was not mourned by the Welsh or the Scots. Personally, he was violent and coarse. It is said he literally frightened a poor man to death in his presence. The impersonation of Edward I by the late Patrick MacGoohan in an otherwise execrable film called Braveheart provides an accurate portrait of the king for followers of this blog.