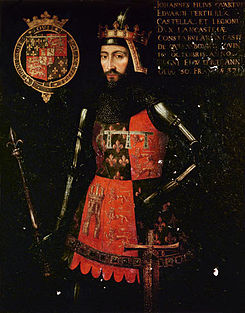 John of Gaunt – Duke of Lancaster

The man who would be king – though not of England

John of Gaunt, Duke of Lancaster was a son of an English king. He was the father of an Englishman who was also a father and grandfather of English kings. Through his third and last wife he even engendered the first of the Tudors, for which haters of this dynasty cannot forgive him. But Gaunt never wished to be king of England, though he fought most of his life to be king of Castilla – in Spain.

He was the third surviving son (and actual fourth son) of Edward III (q.v.) and his queen, Philippa of Hainault; born at Ghent in 1340 – his birthplace supplies his name. He was tall, athletically built, appropriately gaunt of visage, clever and ambitious. His father Edward married him to Blanche, daughter and heiress of Henry, Earl and Duke of Lancaster, who was richer than the king. When Henry, who had served the monarchy dutifully died in 1362, John became Duke of Lancaster. He also became very rich indeed because of the marriage laws of that period.

His house called The Savoy stood on the banks of the Thames and was every bit as grand and luxurious as the king’s palace at Westminster. As he owned thirty castles as well he could have divided the days of the year by thirty-one and spent approximately twelve days in each of his homes – if he had so wished.

Instead, he went with his brother the Black Prince to Spain, and began his wrong but romantic association with that extraordinary country (Spain). The older brother was sick, and John replaced him as the overlord in Gascony (q.v.) As governor he did not achieve much, but this might well be a result of ill-planning and unrealistic expectations on the part of his father.

From the middle of the 1370s, as King Edward III became senile, and the Black Prince’s  illness ended in death (1376), John of Gaunt became the virtual ruler of England, though not a popular one. During one of the mass uprisings the people of London burnt his beautiful home. On the site was eventually built a luxury hotel with the same name – The Savoy.

John’s supporters were accused of fraudulent transactions, and his attempts to regain popularity with the nobility by supporting the reformer Wycliffe only succeeded in making John even more unpopular with powerful churchmen.

It is an odd fact, given the history of England as we know it, that Gaunt never sought the throne, and he served the new young king Richard II as faithfully as he had served the old one. The fact was that he wanted the throne of Castilla, known to English historians as ‘Castile’ which is French, though Castilla and Aragon were two of the largest and most important regions of Spain (with Portugal) and had no connections with France apart from the odd marriage. Gaunt’s reasoning was solid enough for the time: poor Blanche had died of the plague in 1368, leaving a son, Henry of Bolingbroke and two daughters; Gaunt had married as his second wife Constance (or Constanza) daughter of the exiled Pedro I (el Cruel), king of Castilla. For years John claimed the throne in his wife’s name, but in vain. But he did marry his daughter Catherine (by Constance) to Henry III of Castilla, which should have meant something. His daughter Philippa married Juan (son of Pedro I of Portugal) who also became king, and thus the purest Plantagenet blood entered the bloodlines of both Spain and Portugal.

Now John was also a womaniser (who wasn’t in the fourteenth century, except Edward II, who preferred a Gascon knight). Throughout Gaunt’s marriage with Constance he was carrying on an affair with an English lady of the Court called Katherine Swynford, who was in fact governess to the daughters of his first marriage – Elizabeth and Philippa (mentioned above).

This lady had four illegitimate and recognised children by John of Gaunt who were given the surname Beaufort. This was the name of one of Gaunt’s estates in France. When the second wife Constance died the children were made legitimate by Law, but on the understanding that neither they nor their issue held any right to claim the English throne. Here is the reason why so many eminent historians doubt the constitutional legality of the crowning of Henry VII after the battle of Bosworth Field. He was the first Tudor, an Earl of Pembroke, descended from John, Earl of Somerset, the eldest of the Beauforts. Henry became king via an act of war, not because he had  a legal right to the monarchy. This means that in practice Henry had usurped the throne just as Richard III had. A usurper had replaced a usurper.