Home/History of the Cinema, Italian History/What was ‘The March on Rome’?
Previous Next 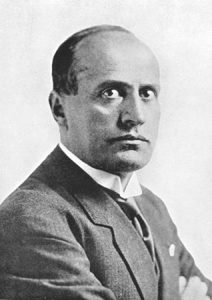 Those of our readers who choose letter ‘c’ are right. Musso planned to occupy public buildings in towns in northern and central Italy, after which there would be ‘a march on Rome’ by at least three columns of his squadristi or Blackshirts. He was certainly aware that in 1919 Fiume had been successfully occupied with the use of armed force by Gabriele D’Annunzio and his men. He did not see why he should not follow this example.

At first, the plan worked, and the fascists occupied public buildings right across northern Italy, in all the major cities, but there the plot stuck, because the Blackshirts were no match for the army. Rome was not threatened at all, because the then prime minister signor Facta had decided to oppose these actions and got King Victor Emmanuel III to sign a declaration of martial law, which forced the army to stop the march.

In fact the King was in a quandary, for he was not certain of his army’s loyalty; would it be towards parliament, Facta and himself, or to Mussolini, who was popular and wanted a senior position in the government? In any event Facta himself resigned, which forced the issue, because Mussolini refused to join any government he could not lead. Instead of marching on Rome the fascist leader arrived in the Eternal City by train, and was immediately made prime minister. If he been thrown out it would have marked the end of fascism in Italy at least, but the bluff worked, because the Chamber of Deputies (only a few of whom were fascists) gave Mussolini’s new ‘government’ (still on paper) a massive vote of confidence – 306 against 116.

The blackshirted ‘hordes’ never marched on Rome at all. They came, like their leader, by train, only 15,000 of them. There was a ceremonial parade for them on 31 October, 1922. One commentator in London said that the Marx Brothers could not have bettered the whole affair.