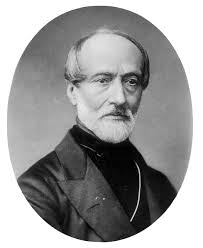 In 1848 he returned, rather briefly, to ‘liberate’ Milan, and in March 1849 became head of the triumvirate (an ominous word that rings down through centuries of Italian history) which served as a decision-making body for the ‘Roman Republic’. Rome came under attack, naturally, and when it fell Mazzini went back into exile with his head still in place, but never again enjoyed the same prestige. After this he made occasional forays into Italy in order to promote conspiracies among his followers.

In 1868 he moved to Lugano, just 25 kilometres inside Switzerland, and in 1872 he slipped again into Italy ‘disguised as an Englishman’, or so the history books report: how do you ‘disguise’ yourself as an Englishman? He went to Pisa, where he died. But death was not the end of Mazzini; he was more than just an Italian intellectual: his words helped shape the liberal ideal throughout continental Europe, and his influence considerably enthused immigrant groups in the United States.

Giuseppe Garibaldi (1807 – 82) was an Italian patriot born in Nice (then a part of Piedmont). While still very young he became a fervent supporter of Mazzini’s ‘Young Italy’ movement. Outfoxed by the authorities, he was forced to emigrate (perhaps flee would be the better word) to South America in 1834 when he was just 26. Here he achieved fame as a military commander in the defence of Montevideo against the Argentines.

In 1848 he was in Italy again, and in April 1849 organised the defence of the ‘Roman Republic’ against the French, surviving a two-month siege before undertaking a brave retreat across the Italian peninsula – and into exile.
In 1859 Garibaldi led a force of guerilla fighters against the Austrians at Lake Como, and in May 1960 sailed from Genoa accompanied by his famous ‘Thousand Redshirts’ to invade Sicily and Naples in the name of a ‘United Italy’.

He then moved on to defeat the Neapolitans at the bloody battle of Calatafimi (Sicily) – the grisly subject of many contemporary paintings – and on the Volturno. Garibaldi relinquished his conquests to the Piedomentese (whose king was incidentally proclaimed ruler of Italy) and retired to Caprera. At least most Italians thought he was retired. In fact he led two more unsuccessful attempts to take Rome. He also fought for Republican France during the Franco-Prussian War. Garibaldi was strangely enough a great hero in the eyes of mid-Victorian England. He was perhaps an almost unequalled example of romantic patriot-leader, in the same historical group as Hannibal, Hereward the Wake, William Wallace and George Washington.