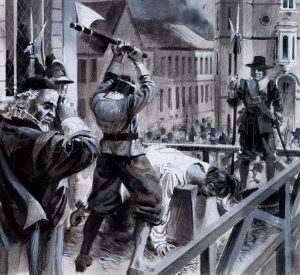 The regicide of King Charles I / lookandlearn.com

Regicide, or the killing of a reigning monarch by his own people has always been believed (though not by republicans) to be among the worst of all crimes. In British history the best known regicide is that of Charles I: there are other not so celebrated perhaps, but regicides nonetheless. Murders committed within the royal family itself are also numerous. Mysteries never yet solved abound too. Here is an easily remembered account of these criminal actions.

William II (Rufus) Family murder and mystery: The unpopular king, a son of William I the Conquerer was fatally shot with an arrow while hunting in the south of England in the year 1100. He was around 44 years old, and was succeeded by Henry I (his brother) who may or may not have arranged the killing. Henry reigned for 35 years.

King John, an immensely unpopular man and king, murdered by strangulation his own nephew Arthur, imprisoned by him, probably in Calais.

Edward II was murdered in Berkeley Castle, Gloucs, by order of his own wife, known as ‘the she-wolf of France’ and her lover, Mortimer, who had his eye on the throne. It was September, 1327. Tradition has it that red-hot pokers were introduced into the king’s body via the anus and rectum, using a horn funnel so that no marks of violence could be seen on the body after death. Mortimer was foiled by Edward’s eighteen-year old son, who became King Edward III and reigned well for fifty years. Mortimer was executed at his order, and he sent his mother the she-wolf to a nunnery which she was not allowed to leave.

Richard II was born in 1367, and deposed in September, 1399. Five months later he was murdered in prison by order of Bolingbroke, who had usurped his throne and become King Henry IV (‘Uneasy lies the head that wears the crown’ William Shakespeare).

Henry VI founder of Eton and Kings College. Weak, often ill and semi-deranged, he was the son of popular Henry V (winner at Agincourt). He was deposed in March, 1461 during the Wars of the Roses, restored to the throne in 1470 as the battles between York and Lancaster raged, deposed again in April, 1471, and finally disposed of in prison in May of that year, presumably by order of the new king, Yorkist usurper Edward IV. Henry VI was the last Lancastrian king.

Edward V was born, a son of Edward IV in 1470. He actually became a very young king on the early death of his father. He was shut in the Tower of London accompanied by his younger brother the Duke of York, by order of king Richard III, who was their uncle. Richard usurped the throne, and the two young boys never left the Tower. Londoners believed Richard had had them murdered, but there is no evidence. The boys had been declared officially illegitimate, and could therefore pose no threat to Richard’s kingship. Two other men, the Duke of Buckingham, a royal cousin, and Henry Tudor himself, stand out as more likely suspects, for a multitude of reasons and motives revealed in countless scholarly books.

Richard III was killed on the battlefield by soldiers supposedly serving him. Kings killed in battle by the common soldiery are not seen as the subject of regicide.

Henry VIII judicially murdered two of his wives, Anne Boleyn and Catherine Howard, but these unfortunate women are only two in a very long list of those who died because they offended Henry or disagreed with him. He was about to kill Cardinal Wolsey, and actually executed Thomas Cromwell, both men having served him faithfully and well.

Lady Jane Grey was born in 1537, promoted as queen by a relative, a Dudley Duke of Northumberland, acceded in 1553, and executed with her teenaged husband Guildford at the order of Mary I (a Tudor) after a reign so brief it was hardly noticeable.

Elizabeth I last of the Tudors, signed the death warrant of her cousin Mary Queen of France and Scotland, whom she had imprisoned. She later claimed that she had been pressured to do so by her courtiers. This is not regicide as such, merely a significant murder in the family.

Charles I, son of James I of England and IV of Scotland, declared war on his own parliament, causing the English Civil War. A gentle, indecisive man, his is the best-known regicide in British history. He was beheaded in 1649 on a cold, blustery day, and it is said that a loud groan from the huge crowd was heard all round Whitehall. He died at the behest of ‘the Regicides’, some, but not all of whom would pay with their lives for their signatures on the death warrant, at the Restoration of Charles’ son, king Charles II.