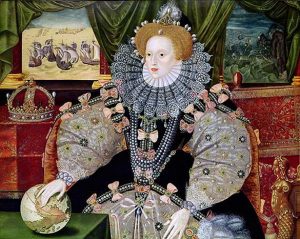 The only half-decent member of the infamous Tudor dynasty was Elizabeth, born in 1533. She was the daughter of Henry VIII and his second wife Anne Boleyn. It is a matter for debate from whom Elizabeth inherited the worst genes, though it is admitted that Anne never went to bed with Henry until he was properly divorced from Catharine of Aragon and a marriage between them had taken place; the Catholic Church had meanwhile been assaulted and robbed, Thomas More and others had been shortened by a head etc. etc.

Elizabeth had an older sister, Mary, daughter of the first Queen. The half-sisters spent most of their lives hiding from a possible executioner, cringing together in some form of imprisonment, and in whatever small time was left, distrusting each other to the point of mania.

Edward V (born 1553) would have been King if he had lived, but he died in his teens, being weak from birth. He was the sickly child of the only one of Henry’s six queens he properly loved, Jane Seymour (correctly pronounced ‘Seemer’). Elizabeth sided with sister Mary against half the nobility of England led by an Earl of Northumberland, who tried to put Lady Jane Grey, a piously Protestant girl of the same age as Edward on the throne of England. This made the devoutly Catholic Mary suspicious, as all her life she saw Protestant plots against her creeping out of the woodwork. No plots were needed however and having actually married Philip II of Spain to combine the greatest Catholic Empire with the growing English one, she conveniently died and Elizabeth suddenly found herself Queen of England, with a Great Council containing Cecil, who became Lord Burleigh and advised Elizabeth well until his death.

The new Queen managed to reduce religious animosity by orchestrating a moderate Protestant Church settlement, and thus the modern Anglican Church was established. It had not been established by her father, who remained Roman Catholic despite being ex-communicated by the Pope. Furthermore, Elizabeth managed to make an unsteady peace with two natural enemies, Scotland and France, and even invited Mary of Guise’s son Francis to marry her and thus combine France and England against Spain. She and her spymaster Walsingham (q.v.) even helped the Flemings and the Dutch in their battles for independence from Spain. Elizabeth encouraged and financed great navigators such as Frobisher, Raleigh and Sir Francis Drake to make piratical attacks on Spanish possessions and ships – preferring to call them ‘gentlemen adventurers’. Various Spanish ambassadors complained bitterly to the Queen about these gentlemanly scoundrels, but she took no notice being personally fond of her naughty buccaneers. Perhaps she was too busy with her admirer and favourite, the Earl of Leicester, whom she called ‘her Robin’. If the ‘Virgin Queen’ slept with Leicester we shall never know, as there is no evidence of physical love between them.

That lady of tragedy Mary, Queen of Scots was thrown (by the Scots themselves) into her cousin Elizabeth’s hands and caused her much torment in 1568. She was put under close house arrest, which caused many Catholic plots to release her and murder Elizabeth. In 1586 the most serious of these plots caused Burleigh strongly to advise the Queen to eliminate Mary. When the latter had her fine head cut off Elizabeth vented her fury on Burleigh, saying he had forged her signature on the death warrant among other monstrosities. He was briefly banished from the Court, but he was the Queen’s best and most cautious advisor, and she needed him.

Philip of Spain needed the judicial murder of the Catholic Queen of Scots as one of reasons for sending a vast navy of Spanish ships packed with infantry against England. This was the ‘Invincible Armada’ of 1588, which proved not as invincible as its name when attacked in the Channel by both the gentleman adventurers led by Lord Howard of Effingham, Frobisher, Drake and others in their smaller, lighter, fleeter, better-armed and better managed warships, plus freakish and destructive storms. The Great Armada was destroyed by these two implacable enemies and England breathed again, because if Philip’s fleet had successfully invaded and occupied England, there would have been great Catholic trouble again, which was the last thing Englishmen wanted, unless they happened to be Catholic themselves.

Meanwhile poor Leicester continued to woo the Queen strongly, getting nowhere as she had decided, much helped by the aging Burleigh, against marriage with anybody. Francis had been forgotten, though he professed to love Elizabeth. Leicester made the dreadful mistake of getting married, to a lady of the royal bedchamber! For this ‘treachery’ he was not forgiven by the Queen, who was, after all, a Tudor, and fairness or unfairness were words unknown to the Tudors.

Elizabeth I was physically and mentally a strong woman, capable of cruelty, capricious, flirtatious to the extent of what the Americans vulgarly call ‘cock-teasing’. But she was the best of a bad lot: even very young Edward, had he lived, might well have developed into a monster too; we must remember one his favourite hobbies was watching Roman Catholics burnt at the stake. The reign of Elizabeth is remembered for her popularity, usually effective government through Burleigh and, later, his son. England acquired a merited international status for having kept both France and Spain off England’s soil. In 1603 Elizabeth died, having kept the whole court waiting, on foot and without sustenance, for more than a day. It is said that her heart, which she always claimed was that ‘of a King’, stopped as she sat on a hard chair mourning her ‘poor lost Robin’. There had been other claimants to her love and her bed, including the foolish but handsome Essex, but her courtiers made short work of upstarts like him. It is also perfectly likely that she had truly loved young Francis, heir to the French throne, but politics kept them apart.