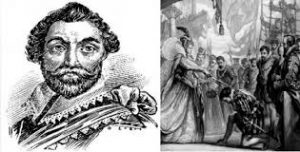 After passing the Magellan Straits, Drake and his few ships assaulted the Spanish American settlements before navigating his ship Golden Hind up the Californian coast, which he rudely re-named New Albion. There was already a New England on the other side of America, and Spain’s Ambassador to Elizabeth’s court reminded her majesty of this. The pirate queen played a permanent game of cat and mouse with the ambassadors dispatched by King Felipe II to London. Frequently, she would keep Spanish and French representatives waiting, under guard in one ante-room, while she discussed plans with Drake, Frobisher, Hawkins and other seamen. When things had been decided, the corsairs would calmly leave, and the Queen would permit the entrance of the ambassadors, who always came to complain about the savage and unprecedented attacks made on peaceful Spain by these barbarous pirates. The Queen would sympathise with these foreigners, and then meet her privateers again to sign agreements and forward finances.

Francis Drake was the first Englishman to sight the west coast of Canada. Now he traversed the great Pacific Ocean (which was hardly ever peaceful), navigated round the Cape of Good Hope at the base of Africa, and docked at Plymouth in 1580 already a rich man. He was given a knighthood the following year.

In 1585 he commanded an expedition which was unlawful, since Spain was not by some miracle at war with England at the time. The expedition sacked Santo Domingo, Cartagena, and San Agustín in Florida, and went on to rescue Sir Walter Raleigh’s starving colonists in Virginia. On his return to England he heard from the Queen’s spymaster Sir Francis Walsingham about Spain’s plans for a great invasion and subsequent occupation of England. Preparations for the sailing of the Spanish Armada were almost finished. Many galleons were ready and waiting at Cádiz, so Drake sailed straight there in 1587 and burned them, thus delaying the sailing of the Armada by one year. This operation at Cádiz became known vulgarly as the ‘singeing of the Spanish King’s beard’.

When the Armada, the greatest conglomeration of fighting and supply ships ever known sailed in 1588 Drake had become one of the English vice-admirals under the overall commander, Lord Howard of Effingham.

In command of the Revenge, Francis Drake took a major part in the scattering of the unbeatable Armada, and its pursuit into the wild winds, unpredictable currents and impenetrable mists of the North Sea. Elsewhere on this website you will find a longer section on the Invincible Armada.

In 1595 at the age of fifty-five, Drake joined with cousin Hawkins on another plundering expedition in the Caribbean, but illness swept them both away to death.