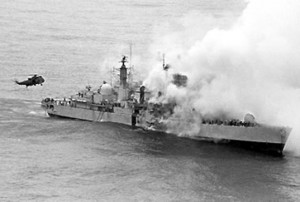 The sinking of HMS Sheffield / theatlantic.com

The sail and massive oars had been the chief propelling medium for centuries when during the middle part of the nineteenth century, steam power first used by railway locomotives replaced them both, in fighting ships at least. Schooners with enormous sail areas continued right through the century and well into the 20th century, but warships needed the tremendous advantages of steam power. The Americans introduced a vessel powered by a propeller in 1843 (the Princeton). Great Britain followed in 1844 with her first screw-driven ship, Dauntless, always a popular name in the Royal Navy. By 1870 we are told by historians that the Navy had abandoned sails altogether.

Then came a really staggering concept, ships made of iron which could not only float, but be driven at high speeds (for those days) by engines. These were the Ironclads, which first saw battle in the American Civil War, and very frightening they were too, even for the intrepid sailors who manned them. The Confederate side used another entirely new idea, semi-submergible boats firing torpedoes. The submarine, like the helicopter, both came from the minds of Spanish engineers and designers, though crude plans for each had already been drawn up by Leonardo da Vinci.

Naturally, as the century neared its close, development in navy navigation, designs and armaments was rapid. The German Navy moved as fast as its engineers could, trying to equal the supremacy of the Royal Navy, but during the Great War (1914 – 18) there was only one genuine sea battle between rival navies, the indecisive Battle of Jutland (q.v. 1916). The Germans advanced faster than anyone else with the development of the scary U-Boat, completely submerged, very quiet, and a lethal danger to merchant shipping. To give but one example: in 1916 -18 the entire sea-going trade between the Canary Islands and Britain was destroyed by U-Boat action – bananas, wine, exotic fruit and passengers – everything and everybody went to the bottom of the Atlantic, and the trade never recovered. The enormous threat to British and Allied shipping was to be repeated for at least the first two years of the Second World War.

This Second War also produced the biggest advance in fighting ships since the Ironclad battleship – the aircraft carrier. Aircraft launched from and re-landing on these fast-moving armed floating platforms dominated the fighting in the Pacific.

When the Second War finished in 1945 it was not long before the newest, and most deadly kind of new vessel began patrolling the world’s oceans, the nuclear submarine, each one possessing more firepower than that used by all the world’s battleships and cruisers put together. But they were (and are) used more as a deterrent than an actual striking force. During the Cold War engendered by Soviet Russia, every ocean was crisscrossed in almost complete silence by Russian and NATO nuclear submarines, armed each year that passed with even more destructive weapons. A Third World War seemed, at last, improbable, as no country could win it. Even the politicians could see that. 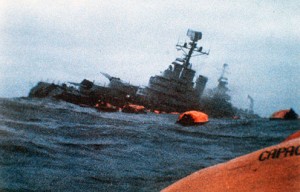 The end of the cruiser Belgrano / theatlantic.com

The last appearance of a full battle fleet steaming on its way towards international conflict took place in front of the world’s cameras and TV teams in 1982, when Britain’s Prime Minister (a woman) sent the Royal Navy thousands of miles to the Falkland Islands in the South Atlantic, which had been invaded by Argentine armed forces. In the battles that followed the fleet’s arrival both British and Argentine navies lost shipping to attacks from submarines and carrier-based aircraft. The Argentine fighter/bomber pilots rightly earned a tremendous reputation during the Falklands conflict. One of the British royal family was there too, Prince Andrew flying a helicopter for the Fleet Air Arm.

Both the Gulf and Iraq Wars emphasised the importance of naval capability, especially as a platform for air power. The United States and the Commonwealth keep carriers in practically every ocean on the planet, supposedly in the cause of peace. Potential enemies do too. And so it goes on.