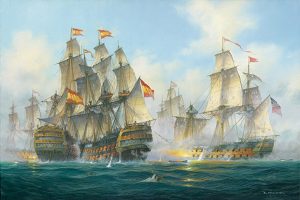 Spain’s royal champion don Juan of Austria was commander of the Christian fleet at the Battle of Lepanto (1571). This was a battle of galleys, luxuriously illustrated by many painters. Both the Turks and the Spanish sailors had the use of cannon mounted on the forecastle. It is said Turkey never truly recovered from defeat in this fight, though they did rebuild their galley fleet. It is interesting to scholars that Cervantes, author of Don Quixote fought at Lepanto in one of the galleys.

In the seventeenth century rivalry for an eventual domination of the seas raged between Britain and the Dutch. Having cut off the king’s head, Oliver Cromwell as England’s Lord Protector continued the late Charles’ policy of building up a royal navy. Among other things, he introduced the idea of three decks carrying guns, giving enormous fire power from port and starboard. He also developed naval training so that broadsides could be fired more often during a battle. Ships’ crews began rivalling each other in the time taken to load, fire and re-load again, ready for use. Many a bloody scuffle occurred in the Portsmouth taverns as a result of murderous competition; bottles, stools and insults were thrown.

It was during the reign of the unfortunate king’s son Charles II that his squadrons were first called ‘The Royal Navy’. Diarist Samuel Pepys in his role as a naval administrator also carried out many reforms. Royal Navy or not, they never really dominated the Dutch, but Holland’s economic decline brought naval re-building and reforms almost to a standstill.

In the eighteenth century it was the French with their fast, elegant warships who put a brake on Britain’s slower-moving, older and heavier ships of the line. But the French ships were less strongly built and more expensive to maintain.By this time most navies’ vessels had copper bottoms for better protection, and occasionally a double hull which helped reduce damage by cannon balls. The epoch had arrived when European navies were composed of state-owned ships especially built to suit conditions.

During the French Revolution (q.v.) and the Napoleonic wars that followed, the Royal Navy at last began to emerge as the most feared state-owned squadrons. Pressing by the naval press-gang, which was in effect legal kidnapping of able-bodied men from the poorer streets, provided the crews. Discipline was harsh, and depended on the character of the commander. Some used the lash or noose constantly, others did not believe in it, like Nelson, which explains why this little man was so popular. When he was killed at Trafalgar, half the crew of H.M.S Victory, not usually crybabies, were in tears.

The Royal Navy won a series of spectacular victories against the French and the Spanish, both nations with a deserved reputation for magnificent seamanship: the Glorious First of June in the Atlantic in 1794, Cape St. Vincent in February, 1797, Camperdown in October of the same year, Aboukir Bay in 1798 and Trafalgar in 1805, a sea battle which deeply affected Napoleon’s war plans at least for while. Rear-Admiral Nelson suffered his only defeat in the silly and ill-planned assault on Santa Cruz, port and capital of Tenerife in the Canaries, when local militia and the townspeople fought off Nelson’s attempt at invasion and capture of treasure ships. But Great Britain’s Royal Navy was at last established as the planet’s premier sea power. This reputation lasted a very long time, and the people joyously sang Britannia rules the Waves! Bonaparte had to concentrate on land-based campaigning, for which he had developed great abilities, though his invasion of Russia, like all invasions of Russia, was unsuccessful.