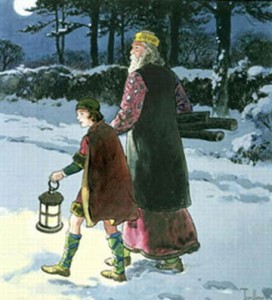 King Wenceslas was a Piast / storynory.com

Here is a strange and indeed rather wonderful thing; the Piasts were the first rulers of Poland, princes descended from a Polish legend called Piast (alive around 870 A.D.), an agricultural worker. But the name was only applied to the dynasty eight hundred years later.

To return to the original Piast, his son Simowit was the first in the line of princes of Gnesen (now Gniezno), assisting in the weak consolidation of Poland, and finishing with the great-great-grandson of Piast who was called Boleslaw I the Brave, crowned king shortly before his death at the beginning of the eleventh century. Then Boleslaw’s great-grandson Boleslaw II the Bold won back the title of king after a period in which kings were forgotten; when this Boleslaw died in 1079, his successors lost the title again! Boleslaw III the Wry-Mouthed however regained the lost lands of Pomerania, Silesia and Little Poland, which he divided in testament between his descendants, which naturally led to constant bickering and bitter struggles among the cousins.

Boleslaw’s great-great-grandson with the difficult name of Przemysl became king of Great Poland in 1295, but died a year later. The kingship passed to his son-in-law Wenceslas or Wenceslaus or even Waclaw II – a name for ever remembered in Christmas carols. The crown then passed to the (Mazovian) Piast line from Wladislaw I the Short, king in 1320, who consolidated his position through the use of marriage alliances, an ancient and respected tradition, not invariably successful throughout history. Wladislaw made these alliances with Hungary and Lithuania. His son Casimir III (no epithet) then managed to reign from his father’s death in 1333 until 1370 (thirty-seven years) when he too died. During this extraordinarily long reign (for the Middle Ages), he relinquished both Silesia and Pomerania but ‘annexed’ Galicia, modernizing its army, codifying the Polish Laws and proividing solid bases for state administrations; he also strengthened the economy. He founded the University at Krakow in 1364, making it one of the oldest in Europe, and died, his death marking the end of the Piast Dynasty, because he was succeeded by his nephew Louis I of Hungary.