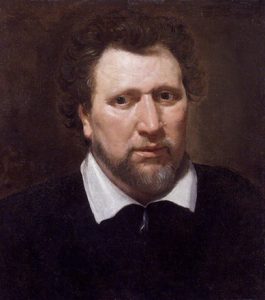 Jonson was born, a Londoner, a month after his father died, and nine years after the birth of Shakespeare. His mother re-married, to a bricklayer, for whom Ben became an apprentice after education at Westminster School. Very much the man of action, he grew bored with bricks and joined the English army in Flanders, where he promptly challenged one of the enemy to single combat in view of both armies, and killed him. He was not yet twenty.

Soon he was back in London and married to a difficult young woman, so he became an actor. Despite his first killing he was still young enough to play girl’s parts, and he may well have been one of the King’s Men theatre group, whose dramaturge was William Shakespeare.

Sadly for the theatre, but gladly for literature, Ben Jonson was a failure as an actor, and took up writing for the stage instead. He also found himself in prison for having killed his second man, this time in a duel. The sixteenth century, as we have mentioned before was a rough one. His first play, a ‘comedy’ called Every man in his Humour appeared in 1598 and Shakespeare acted in it. In 1560 he wrote Every man out of his Humour as a species of sequel. Jonson’s ‘comedies’ do not means family fun, or even a generous mood; they are about an absorbing eccentricity or oddity that possesses a man.

The protagonist of Every man is Bobadill, a conceited, bragging soldier rather like George Macdonald Fraser’s Flashman. He makes a suggestion when asked how he would reduce the casualties of war: “For the publick benefit of the state, not only to spare the entire lives of her subjects in general, but to save the one half of the yearly charge in holding war, I would select nineteen more to myself, throughout the land; gentlemen they should be, of good spirit, strong and able constitution; and I would teach these other nineteen that they could all play very near, or altogether as well as myself. This done, say the enemy were forty thousand strong, we twenty would come into the field and would challenge twenty of the enemy. They could not in their honour refuse us: we would kill them, challenge twenty more, kill them . . . and thus we would kill every man his twenty a day – that’s twenty score, two hundred in day, five days a thousand, forty thousand . . . two hundred days kills them all, by computations.”

Ben was one of those exceedingly rare creatures, the writer popular with other writers: he counted among his friends Shakespeare himself, and Bacon, Herrick, John Donne, Beaumont and Fletcher. He was liked because of a rare intellectual integrity, good fellowship, outstanding courage and the genuine warmth of his affection though he had killed two men. Thomas Fuller wrote: ‘Many were the wit combats between Shakespeare and Ben Jonson, like a Spanish great galleon and an English man-of-war. Master Jonson, like the former, was built far higher in learning, solid, but slow in his performance. Shakespeare, with the man-of-war, lesser in bulk, lighter in sailing, could turn with all tides, tack about and take advantage of the winds, by the quickness of his wit and invention.’

After collaborating in the plot of Eastward Ho! satirizing the Scots, he was thrown into prison, where a threat to cut off his ears and nose was issued. His own mother prepared a poison to use on himself should this ghastliness approach, but with good fortune he was released along with his collaborators in the work, Chapman and Marston. It is said that Jonson had actually had no part in composing the satire, but had accompanied his friends to jail voluntarily.

Free again, he wrote three more ‘comedies’ all black as ink, called Volpone, The Silent Woman and The Alchemist. In The Silent Woman (recently produced by the National Theatre in London), we meet Morose, a bachelor who hates noise. He is about to marry an apparently mute woman, Epicene, and the fact that she is pretty but never utters a word is an essential part of the plot. But once married, Epicene starts talking and hardly pauses for breath. Morose decides to pay a nephew five hundred pounds a year to stop her chatter, which was of course all part of the plot made against him! Then the woman turns out to be a boy in disguise, and all ends unhappily but not tragically.

In Volpone the protagonist is a rich builder in Venice, who pretends to be dying in order to receive gifts from his would-be heirs. One of these goes so far as to present his own wife. Volpone now pretends to have actually died, leaving everything to his faithful (and dastardly) servant Mosca, after which he blackmails him. Also in this extraordinary play there is a small character called Sir Politick Would-Be, who presents a wonderful scheme for supplying Venice with red herrings, as well as a method of detecting plague on ships by the use of onions. There is a difficult-to-find modern version of this play called The Honeypot, made as a movie with Rex Harrison in 1967.

Perhaps the most vivid picture of London in the sixteenth century appears in Jonson’s play Bartholomew Fair. He died in 1637 at the age of sixty-five having outlived all his contemporaries.