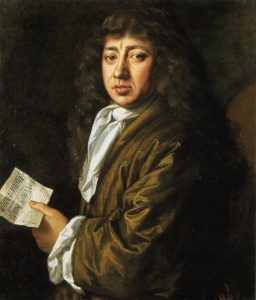 Samuel Pepys (1633 – 1703) is probably the most famous and quoted (and misquoted) diarist in world history. He was nothing more than an Admiralty clerk, who rose after the Restoration of Charles II in the ever-growing British Navy. He became Admiralty Secretary in 1672 when he was thirty-nine. Then he lost his job because some imp accused him of involvement in The Popish Plot (1679). It was nonsense, and he was re-instated in 1684. Meanwhile however, he was keeping a diary which became internationally celebrated, running from January, 1660 to May, 1669. It is fascinating because it provides an intimate picture of everyday personal life (Pepys was exceptionately fond of buxom, pretty, large women), court intrigue (the merriest of melancholic monarchs, Charles II, was on the throne), and naval administration. His account of three national disasters, The Great Plague of 1665/66, the Great Fire of London (1666) that followed, and the impertinent but courageous sailing up the Thames Estuary and river itself of the Dutch war fleet and the damage it did – have been quoted and used by historians ever since. It should be noted that these diaries were written in code which was not de-coded until 1825, one hundred and twenty-two years after Pepys’ death at the age of seventy.

Here are some apt quotations from the Diary:

‘I went out to Charing Cross, to see Major-general Harrison (sic) hanged, drawn and quartered; which was done there, he looking as cheerful as any man could do in that condition.’

‘But methought it lessened my esteem of a king, that he should not be able to command the rain’.

‘I see it is impossible for a king to have things done as cheap as other men’.

‘But Lord! to see (sic) the absurd nature of Englishmen, that cannot forbear laughing and jeering at everything that looks strange’.

‘My wife, who, poor wretch, is troubled with her lonely life’. (Of course she was lonely, poor wretch, as her husband was for ever at dalliance with large, buxom women, such as saucy maidservants)

‘Pretty, witty Nell’. (This was written about Nell Gwynne, the best humoured of all the King’s numerous mistresses, and is the basis of all historians’ opinion that the lady was both attractive and funny, which would of course have been a great attraction to the King)

‘Strange to say what delight we married people have to see these poor fools decoyed into our condition’.

‘Music and women I cannot but give way to, whatever my business is’.