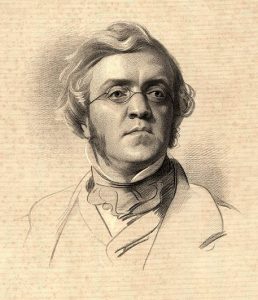 One year before the birth of Charles Dickens, William Makepeace Thackeray was born in Calcutta. It was 1811, and William was the son of a prosperous official on the Board of Revenue, who died when the boy was five years old. When he was six he and his mother sailed back to England, where his mother married again. In 1822 when he was eleven, the future novelist found himself at the Charterhouse School, a ‘Carthusian’ in embryo. To quote Thackeray himself, he was ‘licked (beaten) into indolence’, ‘abused into sulkiness’ and ‘bullied into despair’, from which we can deduce that the teenaged author was unhappy at boarding school where others were comparatively happy, despite the fagging, birching, caning and bullying. These were considered normal and necessary in the nineteenth century for those lucky enough to be born into the potential ‘ruling’ class. Thackeray did not have to go to work in a boot-blacking factory, as did Dickens.

At school, William worked off his distaste for the system by composing satiric burlesques and wicked parodies, digging a vitriolic pen into his seniors and masters. Aged eighteen, we went up to Trinity, Cambridge, where he was befriended by Tennyson the future poet; off on a minor ‘Grand Tour’ he met Goethe in Weimar, Germany. Lazy, then, by nature, the young man spent most of his time lying on sofas and dreaming.

In 1831 he was back at the grindstone reading for the Bar in London but finding this not to his taste he put the tiny fortune he had gained at his coming-of-age into the founding of a newspaper that failed. At the same time he showed every sign of becoming a compulsive gambler.

In 1834 he had no fortune left and had to work for his living. He met and married a charming Irish girl with whom he stayed in harmony until she was taken off to a lunatic asylum. His extraordinary bad luck now began to affect the fabric of his being, though he was writing for Fraser’s Magazine for good pay. His article on Snobbery caught everybody’s attention, and he went on to write a powerful satiric novel called Catherine.

At thirty-three he published a painful portrait of a gambler, based on his own experiences, called Barry Lyndon (since filmed badly by Stanley Kubrick). Lyndon got him a writing job on Punch, which he followed by publishing his masterpiece, Vanity Fair: A Novel without a Hero. In this greatly successful book he had one object – destruction of sham heroics and false sentiment, two malfeasances in fashion at the time, especially after the Napoleonic Wars. The anti-heroine is Becky Sharp, always ready to counter-attack disaster with reckless courage and

conquer Society by use of guile and wit. She is real to the reader because her one aim in life is to take advantage of anything or anyone, and all or most of us have a Becky Sharp inside. Even more than Dickens, Thackeray was an interpreter of the materialistic society. Becky says, “I could have been a good woman . . . with £5000 a year.” Thackeray’s strength lies in his ability to make us laugh one moment and cry the next. Pendennis appeared in 1848, its subject a self-satisfied young man, though the girl he professes to love, Laura, is much more interesting than him. In Henry Esmond (1852) our author with great aplomb takes us back to the days of Steele and Addison. A strange facet of Thackeray’s writing is how he can effortlessly reproduce the manners and customs of the century before his. In 1852 and 3 Thackeray gave lectures every bit as successful as Dickens’ in America or Britain, and poured gilt into his pocket. In those United States his lectures on ‘The Four Georges’ were sell-outs.

Later came The Newcomes and The Virginians (1857). Now quite rich, Thackeray built himself a big house in Kensington, became the first editor of Cornhill, and suddenly died on Christmas Eve in 1863. Frank Swinnerton wrote later, ‘Thackeray’s novels are the work of a clubman of genius . . .he looked out of a window, saw the world go by full of odd characters, but his inclination was towards the past, it was the 18th century writers upon whom he formed his style. The present was full of rivals and anxieties, the future was a darkness . . . he wrote novels about a world of the day before yesterday, when Steele and Addison and Swift could play parts, agreeable or disagreeable, at his whim.’

It is his supreme gift to make us feel present at all his great set-pieces, with portraits painted of worldly, scheming, plotting people painted in dire contrast to high-spirited, proud and honourable persons. He was not himself a cynic, though he found the world he lived in cynical.