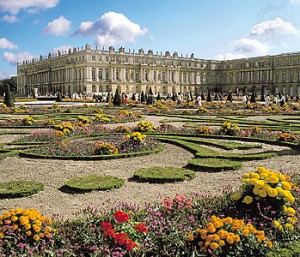 Versailles, a possible cause of the Revolution? / britannica.com

This is one of the oldest established nations in the world, and probably the most individualistic. All Frenchmen are conscious of the superiority of their ancient language, and wearied by foreigners trying – usually failing – to speak it properly. France has enjoyed a hate/love relationship with England for a thousand years, unimproved by several dozen bloody wars, and ever since losing great parts of North America to the British, she has decided that both Canada and the United States are there, but must be ignored.

France’s antique name was Gallia, and there is evidence of pre-historic settlement, shown by paleolithic carvings and rock painting, for example at Lascaux; there are neolithic megaliths at Carnac, and it is accepted that Celtic-speaking Gauls were dominant there by the fifth century B.C. The Romans added Gaul to the Empire in 125 B.C and in it she stayed, more or less protected, but still a Roman region, until successfully invaded and occupied by Germanic tribes in the third and fifth centuries A.D. The Merovingian epoch started with the domination of the Franks (fifth century A.D.) with Clovis I as king of extensive parts of Gaul. The last of the Merovingians was Dagobert I who died in 638, though the rival dynasty survived until the deposition of Childeric III 113 years later.

The Carolingian Dynasty at last replaced the Merovingians when Pepin the Short became king of the Franks in 751, but the power of the Carolingian kings peaked wihh the succession of Charlemagne (q.v.). The Capetian Dynasty (q.v.) was founded in 987 by Hugh Capet. This, the third Frankish royal dynasty, survived until 1328, despite impertinent attempts by the English Plantagenets (q.v.) to occupy France. The English held several large tracts of France, and even called themselves ‘kings of France’, but lands were gradually recovered during the apparently interminable Hundred Years War (q.v.) which lasted from 1337 to 1453, when only Calais on the coast remained under English rule (the town was regained by the English in 1558).

The Capets were followed by the Valois and Bourbon dynasties (1328 and 1589 respectively) but in the sixteenth century, rivalry between Francis I and the Emperor Charles V caused unrest, aggravated by the Religious Wars from 1562 to 1598. In the seventeenth century however the power of the monarchy was restored, reaching a high peak with Louis XIV the Sun King (q.v.). There are those who insist that the Revolution that seized France by the throat in the late seventeen eighties was partially caused by the Sun King’s selfish and costly building of his enormous home at Versailles, the greatest palace in the world. This may be, but the French Revolution of 1789 dismantled the Ancien Régime (q.v.) in the names of Liberty, Equality and Fraternity. After cutting off the head of both the King (Louis XVI) and his Austrian queen the First Republic was declared in 1792.

Political instability was rife between the two world wars in the twentieth century, with governments changing often, but then France was occupied by Nazi Germany from 1940 until 1944, after she had capitulated at great speed, leaving the British Empire to bear the brunt until the USA entered the Second War in December, 1941. Half France was ruled for a while by a puppet regime sympathetic to Hitler at Vichy under Petain (q.v.). Unofficially France was ruled from London by General de Gaulle (conservative and nationalist) and the Free French. In true Gallic style de Gaulle disliked England and her leader Churchill but managed to control his dislike until the Allies invaded France from Britain in June, 1944. He insisted on being the first allied leader to enter Paris.

France’s Fourth Republic began in 1946 but then there was war in Indochina (1946 -1954) which France lost, followed by conflict in Algeria (1954 – 1962) after which the Fifth Republic began in 1958 under de Gaulle, thus breaking his huffy retirement at Colombey. France then became a founding member of what was then called the European Common Market – later the European Economic Community. Presidents Pompidou and d’Estaing had policies not unlike de Gaulle’s but then in 1981 France’s first wholly Socialist president for thirty-five years was elected. He was François Mitterand, succeeded in 1995 by the right-winger Chirac, who was re-elected in 2002. Since then a series of moderate Presidents have ruled France, despite the successes of extreme right-wingers such as Jean-Marie Le Pen and his daughter, and the Socialist cipher who is President at the time of writing.