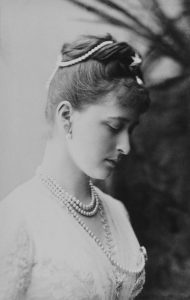 Elisabeth was tall and slim, with a gentle expression that hid a will of steel. She married the Grand Duke Serge Alexandrovitch, fourth son of Tsar Alexander II. In 1891 her husband was made Governor-General of Moscow, and Elisabeth became a much loved figure in both St. Petersburg and Moscow. In February of 1905, as the Grand Duke was crossing the Senate Square in a carriage, a terrorist took his opportunity and threw a bomb, which blew both the carriage and the Grand Duke to pieces. Elisabeth was working at one of many charities in a workroom in the Kremlin and heard the violent explosion.In the square, she found the badly hurt coachman and two dead horses, but the vehicle and the Duke were scattered over the snow. Some of his fingers, still wearing rings, were found on the roof of of one the great houses facing the square.

Elisabeth remained amazingly calm, and even visited the captured assassin in jail. When she entered his cell he asked, “Who are you then?” and she replied, “I am the widow of the man you killed.” There is no written evidence of the conversation that followed, but it is said that the prisoner cried after Elisabeth had left him. She begged the Tsar to spare the man’s life, and Nicholas II would have done so but the terrorist himself refused to beg clemency. She visited the wounded coachman in hospital; no-one had yet told him of the Grand Duke’s death, and his first words to the Grand Duchess were, “how is his Imperial Highness?” She replied, “he has sent me to see how you are.”

Elisabeth gave up all social life after her husband’s death and devoted herself to charities. She sold all her properties, and in 1912 she built the Convent of Martha and Mary in the Ordinka quarter of Moscow. Here she became a nun – Mother Superior of all the religious women who wanted to join her in the convent. She designed the dress of her Order in collaboration with a well known Muscovite painter. In this there is a parallel with the mother of the Duke of Edinburgh, also a nun who designed her own robes.

The Ordinka Convent was soon enlarged to contain a church, hospital, and some workshops and schools for the poor. As Mother Superior this extraordinary woman lived in three rooms of great austerity, and spent most of the day and night in prayer, or tending the sick who came from everywhere to be tended by her, as she was popularly believed to be a saint. During the ghastly Great War, Elisabeth widened the scope of her charitable activities by centralising all donations to the wounded, and founding many new associations.

The Revolution of 1917 did not move her much, even when revolutionaries surrounded her convent shouting, “Where is the German spy?” She showed herself immediately, saying “But there is no German spy. I am the Mother Superior of this place, which is a convent.” The mob finally failed to arrest her, and even joined her in a Mass.

The Kaiser offered several times to provide shelter for Elisabeth in Prussia as the Revolution developed and grew worse, but she refused, saying that she would leave neither her convent, nor Russia, of her own free will. Then the Provisional Government was dissolved and the Bolsheviks took over the running of the Revolution. In June 1918 Elisabeth and her servant were arrested and taken, along with the Grand Duke Serge Mikhaïlovitch, the Princes John, Constantine and Igor, sons of Grand Duke Constantin Constaninovitch and Prince Wladimir Paley, to the district of Perm, where they were locked up. On the night of July 18th, one day after the murder of the Tsar and his family, Elisabeth and the others were thrown alive down a disused mineshaft. Inhabitants of a neighbouring town heard shrieks for help, and found the mineshaft, but for fear of the Bolsheviks no-one tried to help. It is assumed that the victims died of suffocation and starvation and the hurts they received when they were thrown down the shaft. A division of the White Russian Army entered the town a few days later and by order of their commander, the dead bodies were recovered. Strips of a nun’s veil had been used to dress wounds. The Marchioness of Milford Haven subsequently took the remains of Elisabeth and her servant Varvara to Jerusalem, where they were buried in the crypt of St. Mary Magdalene, a Russian Orthodox church which stands near the Mount of Olives.