Home/History of haute cuisine, History of the Cinema, Today, US History/The dry martini cocktail
Previous Next

The history of this cocktail is not without incident. It is a potentially lethal mixture of a raw spirit – gin – with a distillation of the vine, and you were always taught never to combine the two in one glass. The invention was American, perhaps taking place during the years of prohibition and after, again perhaps in New York City, where the Three Martini Lunch soon became fashionable, though it never really disturbed the good American tradition of hard work and commercial success. Manhattan spies tell me it first appeared in either the Algonquin hotel, or the St. Regis, both ultra fashionable with what used to be termed ‘The Upper Class’ US citizen, usually male.

There are many receipts for the making of this explosive sip. Ben Schott says it is Dry Vermouth one third, two-thirds Dry Gin, shaken, garnished and served on or off the rocks. Professional barmen will disagree with the words in italics. ‘Ginger’ Taylor, for half his life chief barman at the Connaught Hotel in Carlos Place, W.I. Had a different method: Half fill your cocktail shaker with fresh ice cubes; pour gently over the ice either Gordon’s or Beefeater’s best gin while you count four seconds out loud: then pour Dry Vermouth just as gently, also counting four seconds. Close the coctelera and shake vigorously as if you are playing the marracas; pour into a special martini-glass (see illustration) and add an unstoned green olive speared with a wood toothpick (or you may own your own pure silver implement). The ice cubes must be prevented from entering the glass by a special filter in the top of the shaker. Sip slowly and do not smoke while sipping, as the tobacco spoils the unique taste. 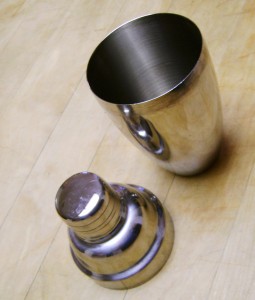 On the market there are many shapes and sizes of Martini glasses. Edith Sitwell had her own glass at her ladies only club in London. According to Gore Vidal, the glass was a small goldfish bowl, which meant that poetess and eccentric Edith would have to be helped a little later into her dining chair to enjoy her ‘Red Luncheon’ – lobster, strawberries and a bottle of red Burgundy.

Some restaurants cheat by employing those horrid bowl-like glasses into which champagne should never be poured. This wine must be served in tall, thin tulip glasses, or those wonderful bubbles escape and the taste is lost. As I was saying, some eating houses cannot be bothered with proper martini glasses. If so, you should withdraw your custom.

Should you feel a bit like James Bond, you will prefer the Vodka Martini, also shaken not stirred, and made with Smirnov vodka. In fact Smirnov is not Russian at all, it is made in America, to a recipe by a Russian. The cocktail is made in exactly the same way, though some like a Maraschino cherry in the glass instead of a green olive. On the subject of olives, do not use one stuffed with anchovy, for obvious reasons or taste and good manners.

One last word: actually they were the last words spoken by Humphrey Bogart the film actor, who was born into an upper-upper-class American family, and spent his working life playing growling bum gangsters. It is said on good authority that when ‘Bogey’ was dying, he whispered, “I knew I should not have changed from whisky to dry martinis”.