Home/A History of North America, US History/Andrew Jackson
Previous Next 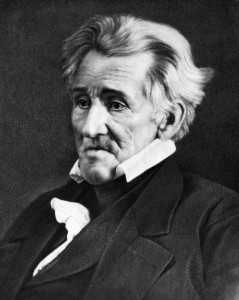 Son of an Ulsterman, Jackson was born in South Carolina 1767, a true-grit Southerner. Fame was first achieved by his leadership and reputation for courage in fighting the Creek Indians.Though he was young, his men called him Old Hickory. He broke up the Creeks at the Battle of Horseshoe Bend in 1814, and, inevitably took half their territory. To make a point, plenty of other white soldiers would have taken all of it.

Alabama, Georgia and Mississippi were therefore opening up with more safety for white settlers. In the Anglo-American War, now with the rank of General, he beat up the British redcoats at New Orleans in January, 1815, after which he became an American hero, and rich as well, as he bought cheaply some of the lands he had fought for successfully, and exploited them. Among other things, he dealt stupendously in slaves.

Unsurprisingly, given his reputation, he stood for President in 1828, perhaps a little elderly at sixty-one. Most US Presidents had either been southern aristos or rich East Coasters, but Jackson had risen in good American style from nothing. He wanted to give the man-in-the-street more say in government, having been inspired by Jefferson. He believed federal government should be small. The best government, he said, is one that governs least. He was against the use of public moneys to build roads, canals or railroad: ‘Let the rich guys pay . . .’ Like Jefferson again, he removed Native Americans to ‘reserves’ west of the Mississippi, and backed the State of Georgia when it refused to obey a Supreme Court ruling that moving the Cherokee (q.v.) from their lands was unconstitutional. Oddly, as he was a staunch defender of state rights, Jackson firmly opposed anything which seemed likely to break up the Union. In South Carolina, he managed to avoid what promised to be civil war for thirty years. Again, he was a hero.

Above all he foresaw a country where big business struggled against the rest of the country for control of both states and nation. How right he was! He had foreseen by a hundred years or so the infamous Industrial/Military Complex which would lead the United States into unwinnable wars, and the killing of a super-popular President in 1963.

Andrew Jackson was a true democrat who enorously increased the prestige and authority of the President by vetoing no less than twelve bills – more than all his predecessors had done put together.. With his friend Van Buren (who had assisted him into the Presidency) he organised and in effect founded the first modern, and nationan-based political party – the Democratic Party. It would not be wrong to say that Jackson changed the nature of American politics permanently. He died in 1845.