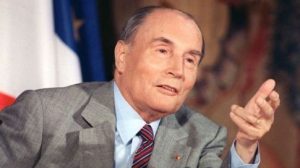 Mitterand was a life-long Socialist who served in the brief French military resistance to German might between 1939 and 1940, and is then said to have co-operated with the rather spare French resistance after the Vichy Nazi-dominated occupation government was set up. Resistance to the Nazis was ‘spare’ because the majority of French people had had quite enough of fighting Germans during four or five generations, and were only too pleased to denounce a suspected neighbour to a Vichy official, or, no worse as it happened, the Gestapo. He was born in 1916, in the middle of the Great War, and was elected a Deputy in 1946 at the age of thirty; almost immediately he became a Minister in the post-War Cabinet. From then on he would always hold posts in the Government of the Fourth Republic.

Though Socialist by inclination, Mitterand was not actually a member of the French Socialist Party, but one of the leaders of a small faction of it, the Union Démocratique et Socialists de la Résistance (UDSR). He was a stern opponent of General de Gaulle, which required bravery and cheek, but in addition he disliked the new Constitution; he thought it at least semi-fascist and said so in a book called Le Coup d´Etat permanent published in 1964 but now apparently out of print.

In 1965 he stood without success as a left-wing candidate in the presidential elections. He was not however a candidate in the 1969 elections, in which the socialist vote was poor indeed. In 1971 the Socialist Party joined forces with various left-wing groups, including Mitterand’s own, to form a new party, of which he was instantly elected leader. Then came an agreement with the French Communist Party on policy.

François Mitterand was elected President of France in 1981, heading a coalition government that included Communists (1981 – 1984). Though weakened by coalition, as are all such governments, Mitterand started a major programme of nationalization and the creation of jobs. Sadly for him, someone had got their maths wrong and these reforms produced an economic crisis. Things did not improve when in 1984 the right won the parliamentary elections, which led to a period of so-called ‘co-habitation’ i.e. the President a Socialist in the Palace, and the Government ruled by the right, which meant numerous complex restrictions for François.

Things changed in 1988 when he won the Presidential elections outright as well as achieving an assembly in the parliamentary elections of the same year in which, despite having no majority, it was possible to form left-wing cabinets. His political authority was thus restored. But not for long: in 1992 the Socialist Party was soundly defeated! French politics have always been bewildering; Mitterand did sterling work in his peacemaking efforts in Bosnia, but despite this, the economic recession, unemployment and Socialist scandals combined in his eventual loss to Jacques Chirac, ex-Mayor of Paris, in the elections of 1995. He died in January1996. He was eighty years old.