Figures in a Revolution: J-P Marat and Charlotte Corday

Home/French History/Figures in a Revolution: J-P Marat and Charlotte Corday
Previous Next

Figures in a Revolution: J-P Marat and Charlotte Corday 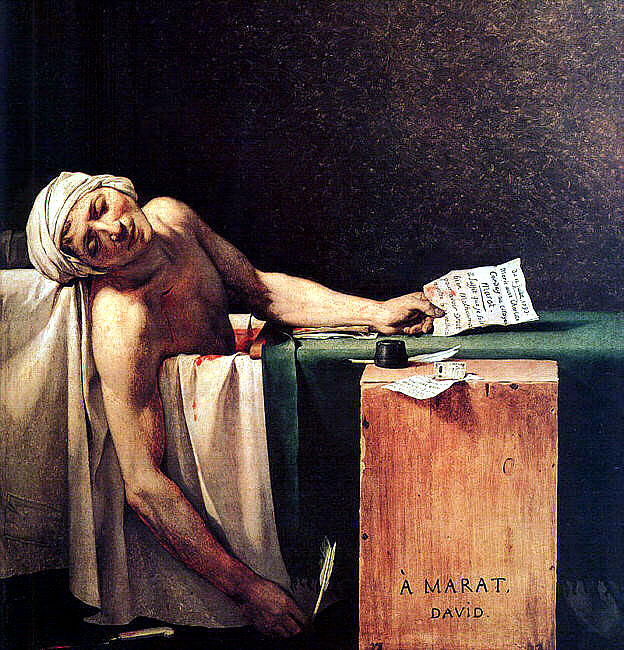 Marat dead in his bath after Corday’s visit. From the painting by David.

Two of the more interesting minor players in the French Revolution were Jean-Paul Marat (1743 – 93) and Charlotte Corday D’Armont (1768 – 93). Marat , rather strangely for a French revolutionary leader, was a qualified doctor who practised medicine in London. It was in the British capital that he published his revolutionary tract Philosophical Essay on Man. Marat was thirty when the pamphlet was distributed in English, causing him considerable fame among the English chattering classes. In it Marat contradicted the view of Helvétius which was that science was irrelevant for a philosopher.

He returned to Paris to edit the new radical newspaper L’ami du peuple, and shortly became one of the members of the extremist Cordelier Club. He rapidly rose in the ranks of people of importance involved in the anti-Monarchist, anti-Church, anti-Parliament but still Glorious Revolution. Though he was by no means a fool, he proceeded to attack other leading revolutionaries – on humane grounds usually – but managed to avoid the usual punishment for such lèse majesté. Briefly exiled (but not murdered) by public prosecutor Fouquier-Tinville in 1790, he returned in 1792 to be elected to the Assembly in opposition to the Girondins. This led to triumph in 1793, when the Girondins were soundly defeated in the Assembly, after which most of that group were shortened by a head on the guillotine. For once Marat did not care about the shedding of blood.

Infected by an unknown skin disease, Marat had to spend most of each day lying in a salty bath, something which as a doctor he approved of, had indeed proposed. Naked in a bath he was however unprotected, and an aristocratic young woman called Charlotte Corday D’Armont got herself inside Marat’s house in Paris with a knife, and stabbed the philosopher/doctor to death in his bath. He was fifty years old, and by this marginally less brutal death managed to avoid the guillotine which awaited virtually all his friends and colleagues in the Revolution, including its chosen leader – Robespierre.

Charlotte Corday was, as I have said, a French noblewoman. She spent a lonely and fruitless childhood in family farms in Normandy. At eighteen she heard of the Girondins (with the Jacobins) a prominent and powerful revolutionary group, which she promptly joined. Signing up with the Girondins gave her for the first time an abiding interest in life, but it also caused the death of Marat and Charlotte herself.

From what Charlotte knew of Jean-Paul Marat she thought him a tyrant, and her obsession with the idea of doing away with him became traumatic. He was not in fact a tyrant, quite the opposite in fact, but Charlotte was easily convinced by other Girondins who wished his death.

She arrived in Paris in 1793, an ominous year for both Marat and herself. Quickly she found where Marat lived, and managed to enter the house unobserved. As related above, she found Marat alone, defenceless in a bath, and taking a knife from the kitchen she stabbed him a number of times and later allowed herself to be arrested. At her trial she claimed to have removed a tyrant from this world, though her lawyer claimed insanity. At a time when the Committee for Public Safety was killing hundreds of French people simply because they were opposed to the Revolution, or merely aristocrats, a claim of insanity was not going to be of much use. Charlotte was guillotined. She was twenty-five.

In the stage play known as The Marat/Sade (the actual title is much longer) staged at the Royal Shakespeare Company in the 1960s, Charlotte’s part was played interestingly enough by a Marxist/Socialist radical actress called Glenda Jackson, later an MP. It was thought at the time that Miss Jackson did not know she was playing the part of a titled noblewoman. Her acting was splendid however, and the role of Charlotte Corday made her name and started her film career.