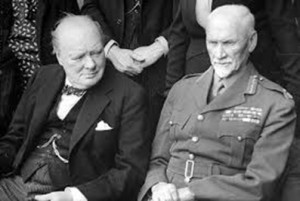 The South African soldier, hero and future Prime Minister was born in the Cape Colony in 1870. No-one was more in the centre of South African politics during the first half of the 20th century. Nobody in South Africa but Smuts was regarded as a world-class politician and statesman, even in the 1990s forty years after his death.

He studied at both Cambridge and Stellenbosch Universities; disturbed by the Jameson Raid (q.v. 1895) he went to live in the South African Republic (Transvaal) in time for the outbreak of the South African War in 1899 when he was twenty-nine. Despite his comparative youth he was given command of Boer troops operating in the Cape. He fought with the Boers until the end of this colonial war, when he cooperated with Louis Botha in the negotiations which resulted in the Treaty of Vereeniging. Smuts and Botha were co-founders (with others) of an all-Africaner party. the Het Volk (the People) which claimed self-government from the British, for the Transvaal and what was then the Orange River Colony. Britain conceded this in 1907. Smuts became Minister of the Interior in the Transvaal.

He was a delegate to the National Convention in 1909, which led to the creation of the Union of South Africa in 1910. This was under white minority rule but stayed within the British Empire. Botha was Prime Minister, and Smuts held various ministerial posts under him. Between them these two men formed the South Africa Party (SAP) in 1911. They were in favour of South Africa’s participation in the First War, though they stood for complaints from the Africaners for putting down the Africaner Rebellion in 1914, which was against the use of South African soldiers for fighting against Germany in German South West Africa.

Smuts was made commander of British forces fighting in East Africa, and represented South Africa at the Imperial War Conference. Undoubtedly it was his great energy mixed with recognised abilities which got him into Lloyd George’s War Cabinet in the last two years of the First War. He was at the Peace Conference in 1919 where he strongly advocated a conciliatory peace with Germany (not achieved), and worked with US President Wilson setting up the ill-fated League of Nations (q.v.).

Botha died in 1919 and Smuts became Prime Minister. In 1922 he was responsible for savagely putting down a rebellion of white miners, which resulted in the SAP losing its majority in the 1924 election. Hertzog became PM. Smuts then led the opposition in the South African parliament. Hertzog’s government needed wider support, especially during the Great Depression (q.v.) so a coalition was made with the SAP in 1933, while Smuts became Deputy Prime Minister. One year later Hertzog’s National Party and the SAP combined together, becoming the United Party. This represented defeat for Jan Smuts because the price to be paid was his forced agreement to the ending of the Cape Franchise for Africans, who thus had not even a limited say in the electing of white MPs. Smuts had long recognised that black people were treated unjustly, but it seemed he was not prepared to do much about it. In 1906 he wrote, ‘I sympathise profoundly with the native races of South Africa whose land it was long before we came here to force a policy of dispossession on them,’ Perhaps he was tired when he continued, ‘I feel inclined to shift the intolerable burden of solving the problem on to the ampler shoulders of the future.’ After this Smuts supported a policy of segregation.

In 1939 with the opening of the Second War, Hertzog wanted South Africa to remain neutral, but Smuts supported his country’s entry into the War on Britain’s side. Hertzog was beaten and Smuts became PM again. During the War he became a close associate of Winston Churchill’s, and wrote the Preamble to the Charter of the United Nations in 1945. In his last years, Smuts moved further and further away from segregation, thinking there was plenty of time for reform. He was profoundly shocked when the National Party, floating on a sea of apartheid, won the 1948 election. He died in 1950, in office as leader of the Opposition in the South African Parliament.