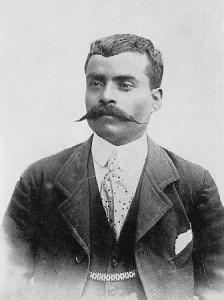 He then announced a reform in agrarian policies, by which the great estates would be divided up among his followers, who would employ local Indians as the work force. Latin America has had to watch many such leaders of the people.

At first, Zapata supported Francisco Madero, and with only a small, ragged force of little discipline but great enthusiasm, he helped topple Diaz off his dictator’s perch. Later, in uncomfortable partnership with Pancho Villa, he fought the regime of Venustiano Carranza. The latter would be the nemesis of them both.

He continued to make drastic agricultural reforms in the southern areas under his control, creating impartial commissions for distributing the lands taken from their owners. No fool, he set up the Royal Loan Bank in which he had a partial interest. In 1919 the usually careful Emiliano was lured by guile to the Chinameca hacienda, where he was taken by surprise and shot to pieces by soldiers sent by Carranza. He was thirty years old. He was played with some vigour by Marlon Brando in a Hollywood production called ¡Viva Zapata! In 1952. Carranza, by the way, was himself assassinated in 1920. 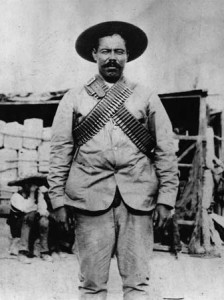 Pancho Villa, a.k.a. Francisco Villa a.k.a Doroteo Arango was another Mexican revolutionary, born in 1870 the son of a poor farm labourer. As a boy and youth he enjoyed a number of modest employments, but in 1911 he joined Madero’s uprising against Diaz, and rose to be a distinguished military commander (without any military training) in the Mexican Revolution.

The fighting was fierce, uncontrolled and bloody. Villa and Zapata were defeated by Carranza, with whom Villa had once allied himself against the dictator Victoriano Huerta. Villa and Zapata escaped to the mountain regions of north and central Mexico. From these fastnesses both continued a guerrilla war of much criticised ferocity. In 1916 Villa was personally responsible for shooting a number of United States citizens in Santa Isabel; among the North Americans (gringos) was the compiler of The Devil’s Dictionary, a wit called Ambrose Bierce. These murders made Villa a villain in American eyes, whereas Zapata was seen of as a liberal hero and, eventually, a martyr for the cause. 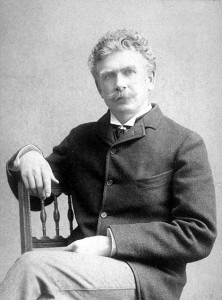 When Villa was impertinent enough to mount an attack on Columbus, New Mexico, he precipitated the sending of a US force by US President Woodrow Wilson, but the Americans failed to grab Villa, who continued his guerrilla war, opposing Carranza, until the latter’s death in 1920. Pancho Villa then laid down his arms, surrendered and received a pardon. In 1923 he was murdered in his own hacienda in Chihuahua by persons unknown. He was forty-six.