Home/A History of North America, US History/Oregon: boundary dispute & the Trail
Previous Next 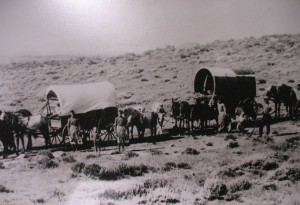 Women drivers guarding their wagon on the Oregon Trail, a contemporary photograph / my americanodyssey.com

Between 1843 and 1846 the vast Oregon territory in the United States of America became a subject for dispute between Britain and the States, despite the fact that the latter had declared itself independent in 1776, sixty-seven years earlier. Oregon was a huge area stretching north from California to the borders of Alaska, and west from the Rocky Mountains to the Pacific. British claims were based on Cook’s charting of part of the coast in 1778. US claims were centred on Robert Grey’s discovery of the Columbia river in 1792, and in part on the findings of the Lewis and Clark expedition. After the successful Louisiana Purchase, President Jefferson had sent his own private secretary Meriweather Lewis, accompanied by William Clark on an expedition to find new territory and another possible route to the Pacific. They followed the Missouri river to its headwaters in May, 1804, and then crossed the Rockies. Via the three rivers Clearwater, Snake and Columbia they got to the Pacific coast in November, 1805 after a heroic and arduous journey of seventeenth months duration, covering more than four thousand miles. Back in St. Louis, where the expedition had started in September 1806, they presented maps, botanical specimens and a load of information on Native American habits, strategies and customs. Jefferson insisted that the Lewis and Clark expedition strengthened the US claim to Oregon, as well as stimulating the fur trade.

In 1818 America and Britain agreed on what they called ‘joint occupation’, though it was noticed that by 1820 the British-owned Hudson’s Bay Company was in control. American trappers reported that Oregon was a fantastically fertile land, and it became ‘a land of promise’, with settlers from the east following what became known as the ‘Oregon Trail’. By 1845 more than 5000 American settlers were established there, demanding that Oregon should exclusively become American. No-one wanted or suggested war but newly elected President Polk was making a deal with Canada leading to a frontier following the 49th parallel from the Rockies to the Straits of Vancouver. Oregon therefore had to be American, while Vancouver Island itself was to remain British.

The Oregon Trail from the Missouri River to Oregon was hazardous in the extreme, but it became the subject of the greatest land migration in American history. Settlers set off in their covered wagons, attracted by the fertile grasslands, where they could keep cattle and grow crops. With typical American toughness and guts, they crossed prairies, rivers, desert and high mountains. On the way they had to cross the Snake River by raft, a dangerous enterprise, since the wagons and their teams had to balance on makeshift log rafts. Somehow they got across the almost impassable Blue Mountains with their icy peaks. On the way they were attacked by hostile Native Americans, assaulted by disease, and weakened by exhaustion, but most of them got there. Shortly afterwards, this being America, railroads were built following virtually the same route, and by 1870 the original Oregon Trail was forgotten, except in legend, song and movies.