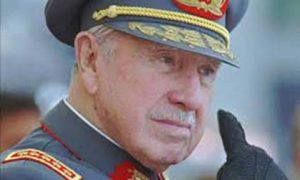 He was another military dictator who was and is still hated by almost everybody, even after his death, except a substantial portion of the Latin American population. He ran foul of the tremendously powerful Soviet propaganda machine, and paid the price. As a result of poisonous journalistic pens, he became one of the most misjudged figures of the twentieth century.

His country was Chile, an amazingly beautiful though narrow strip of the lower Pacific coast of South America. Chile had elected a communist thinker and teacher called Allende, who presided by popular vote over what had been the second most prosperous Spanish-speaking state in the half-continent. He presided so well that in very little time inflation was running at nearly 20,000 per cent per annum, armed gangs were taking over towns and factories, the export of Chilean wine, one of the finest in the world, had glugged to a halt, and anyone opposing Mr. Allende woke up dead. I happened to be living and working in Lima, Perú at the time (mid-seventies) and my flat in that city was for a short time full of Chilean opposers of Allende’s government, who had escaped by their skin of their teeth. Though mostly intellectuals, as befits fellow teachers, the Chileans in my flat had no time for Allende or what he had done to Chile. 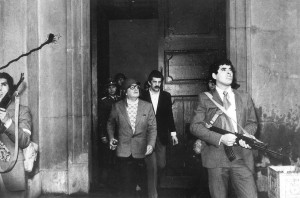 11 Seotember, 1973 Allende with guards and helmet, attacked in his palace / the guardian.com

Denying the Soviet propaganda employed by their elected President, both houses of the Chilean Congress decided to invited Pinochet to take power from him. The communists naturally insist that Pinochet took over by the use of arms. He certainly used arms when he became president after Allende was dead, as he ordered the elimination of at least 30,000 foreign revolutionary gunmen who had plagued the country. They were shot or imprisoned by the army, which was loyal to the general.

There was a popular uprising in Santiago, and Allende, donning a military helmet, was shot in his own palace by someone, perhaps a United States government infiltrator, perhaps a patriotic Chilean dissident, perhaps one of his own bodyguards. Who knows?

Pinochet was a hard man, almost as hard as Lenin and Stalin and Pol Pot, but nowhere near as devious. He was determined to prevent Chile becoming another Cuba, and because he and his companions understood the weird challenges of Economy he shortly made Chile by far the richest country in South America, still today an unchallenged fact, despite the usual equalist moan from the deep armchairs of persons rich enough to own three homes and uncounted domestic servants. But Pinochet’s success made him the favourite hate-figure in Moscow. The Soviets were in charge of his demonization, and one is not sure that the lies spread about him will ever be corrected.

Later, when Argentina’s military dictators decided to challenge Britain and Margaret Thatcher over the Malvinas, Pinochet gave invaluable help, saving a great number of British lives. Great Britain repaid this by inviting the general to visit London, which he did, to his peril as it turned out, as a left-wing judge in Spain grabbed the advantage and ordered his arrest by Interpol during the British visit, on charges of having killed Spanish nationals in Chile. It seemed for a day or two that the mole Garzón’s strategy might work, and that Pinochet would be extradited by Spain to be accused in that country. Reason prevailed however, as the general had been invited officially to visit Britain, though he was no longer President, and ‘perfidious Albion’ could hardly invite someone and then let him go handcuffed to be judged by another country. Pinochet was permitted to return unmolested to Chile, but many Englishmen were, at the time, upset and ashamed by the incident. Garzón was later revealed as a noxious troublemaker in Spain and removed from the bench.

Though the Soviet propaganda machine, at one time the world’s worst, ceased to exist after the fall of the Berlin wall, I accept that this website will promptly be attacked by its vestiges, which are numerous. But the attackers might do well by studying the facts, not the propaganda. Chile was about to be bankrupted by a dogmatic believer in Soviet-style government, and saved (yes – for the West) by a military man whose methods were draconic, harsh, certainly contentious, but finally effective. The aim had been of course to have North Korea and Vietnam as centres of dispute (and military bases) in the Far East, and Cuba, Venezuela and Chile in the West. The idea was foiled, at least, in Chile, and South America has General Pinochet to thank for it, though of course this will not happen.