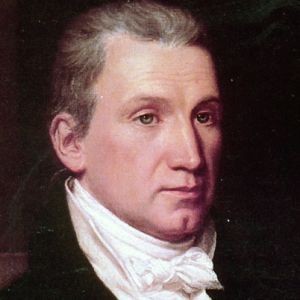 In 1817 he became President, worried by the question of slavery, because though he was not officially an abolutionist he knew that this canker on the American soul was evil. When black people were occasionally freed he encouraged sending them to Liberia, and got that country’s capital Monrovia named after him.

Despite being firmly influenced by J. Quincy Adams (his Secretary of State from 1817 – 25) who disliked England and Europe in general, he made a treaty with Britain which fixed an official (but unmarked) boundary between Canada and the US at the 49th parallel. He also ‘persuaded’ Spain to surrender a part of Florida, which then evolved into a state of complete US sovereignty. He will best be remembered by the introduction of his Monroe Policy or Doctrine, an integral (and contentious) part of US foreign policy up to the present day.

Around 1823 Monroe was given to understand that ‘The Holy Alliance’ (some European powers except Great Britain) was preparing to assist Spain in her attempts to regain her original Empire in South America. At the same time he was disturbed to hear that Russia proposed extending the boundaries of Alaska into Oregon State, as well as claiming most of the west coast of North America as a possible territory for Russian colonization. Canning, British Prime Minister was as concerned as Monroe and suggested an alliance of Britain and the US to oppose any attempt by The Holy Alliance to recover the Latin American Spanish Empire by reconquering Spain’s former colonies. But John Quincy Adams was against the use of force and arms against force and arms and persuaded Monroe to make a speech in Congress which might serve as a warning to Europe, instead of any declaration of war. In the speech Monroe said,”The American continents are not henceforth to be considered as subjects for colonization by any European power.” He added that any European interference in the New World would be seen by the United States as ‘unfriendly’. Then came the most significant part: “Our policy in Europe . . . is not to interfere in the internal concerns of any of its powers, or interfere with any of their New World colonies.” This was ‘isolationism’ at its most naked, and as events proved, and are still proving not at all binding, as the United States has done little else ever since but interfere in European (and Asian and Middle Eastern) concerns – not always with the happiest results.

Monroe also stated that the US should ‘steer clear of permanent alliances with foreign nations’. Naturally it can be seen that if the Monroe Doctrine had been closely observed, there would have been no American interference with Central and South American states (Nicaragua and Guatemala for instance), no war with Cuba, no joining in the Great War or the Second, no Korean War, no Vietnamese War, no Iraq War, no Afghanistan ferment etc. etc. But the Doctrine still stands. Biographers of Canning insist he thought it impertinent, especially as at that time the United States did not have the strength needed to enforce it, and indeed it was the Royal Navy, wishing to preserve British domination of New World markets, that kept other powers away from American coasts for the rest of the 19th century.

No-one much cared about the Monroe Doctrine in the States until the Civil War, when the French put poor Maximilian, a Hapsburg archduke on the throne of Mexico, an arguably stupid decision, as French troops were quickly withdrawn when the American Civil War was over, and the Mexicans promptly killed the defenceless Maximilian.

By 1904 there was an American president tough enough to declare that his country felt it right to interfere in any Latin-American state guilty of what he termed ‘wrong-doing’. This was Theodore Roosevelt, whose ‘big stick’ (contrary to the Doctrine) was to be used in Morocco and several Caribbean and Central American states during the next 20 years. The fact remains that the Doctrine, still a part of American policy, signifies US domination and obstinacy.