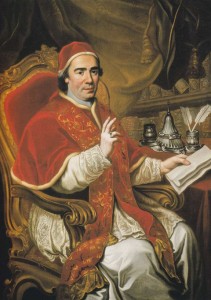 Six Italian and one French, the following pontificates flourished (or not depending on their history) during the fourteenth, sixteenth, seventeenth and eighteenth centuries:

Clement V (Bertrand de Got) was a French pope born around 1260, who became Bishop of Bordeaux in 1299 before reaching forty. He is mainly remembered for suppressing the Knights Templar, after being elected pope in 1305. He was also responsible for moving the seat of the papacy to Avignon, a disastrous event for Italy, which he expedited in 1309. He remained pope for only nine years.

Clement VII (Giulio dei Medici) was born in 1478 and was elected pope in 1523 when he was forty-five. He made it his business to join King Francis I of France in his conflict with Holy Roman Emperor Charles V. It was not a good choice of alliance because Imperial troops sacked Rome in 1527, taking the Pope prisoner.

It was this Clement who (when released from prison) refused to sanction King Henry VIII’s divorce from his Spanish queen Catherine of Aragon. It could be maintained that by doing so he hastened the Reformation, the Dissolution of the English monasteries, the enriching of many English noble families, a Protestant England, and the execution by burning of hundreds of English Catholics.

Clement IX (Giulio Rospigliosi) was born in 1600 and lived for sixty-nine years. He was papal ambassador to Spain from 1644 to 1653 and Secretary of State to Pope Alexander VII (a Chigi). He was elected pope in 1667 and only two years later angered King Louis XIV of France by trying to stop him persecuting the Jansenists (q.v.).

Louis gained a small revenge when Clement asked him to assist Venice against the Turks during the War of Candia. Whatever tiny force this Clement was able to muster was not enough to avert the Turkish victory; it is maintained that Clement died of a broken heart, mourning the thousands of Christians slaughtered during the final stages of the siege.

Clement X (Emilio Altieri) was born in 1590, made a Cardinal in 1669 and elected pope one year later. Among the important posts he had held before becoming pope was that of Ambassador to Naples. He was much bothered, as were all popes during this period, by the looming Turkish threat in the Mediterranean and Eastern Europe, and tried in vain to arouse the rest of Europe from its torpor. Once again, Louis XIV of France was involved, partly because this Clement refused to permit the French king to collect moneys from vacant sees – an issue we have already seen troubling other popes and angering the Sun King. Clement was quite unable to persuade the European princes to take much notice, and it was at once obvious that the epoch of grand crusades against the infidel was over. This pope did however manage to strengthen papal finances sufficiently to aid the Poles in their struggles against the Turks.

Clement XI (Giovanni Francesco Albani) was born in 1649 and was elected pope in 1700. He was Supreme Head of the Roman Catholics for twenty-one years. Government of the massive Church was difficult, as it always has been, for popes, and this Clement saw a sharp decline in the Church’s political rôle. It seems that though he tried at the beginning to avoid conflicts with the great, not to say magnificent ruling houses in Europe, he antagonized the Austrian Hapsburgs by supporting the recognition of Philippe of Anjou as rightful King of Spain; then he infuriated the Bourbons by surrendering to the demands of Joseph I of Austria to recognize his brother Charles’ bid for the same throne. (See Pope Innocent XII)

Papal influence in France grew rapidly, encouraged by Gallicanism and the appearance of Jansenism (q.v.). Like Innocent XII, he issued another Papal Bull Unigenitus, in 1713, though Innocent’s Bull became apparent nine years later. Clement’s Bull irritated the French clergy, who had supported the now outlawed heresy. Clement XI died in 1721.

Clement XIII (Carlo Rezzonico) was born in 1693. Before becoming a Cardinal he held several important ecclesiastical posts. He got his cardinal’s hat in 1737 at forty-four, and was elected pope in 1758. From the start, he was unpopular with powerful European princes all of whom were trying to maintain greater control over their own national Catholic churches. Historians claim that this Clement’s biggest opponents were the rulers of Portugal and Spain, Naples and France, the last three being Bourbon potentates engaged in anti-Jesuit campaigns. Meanwhile the Hapsburg Empire was seeing the rise of Febronianism, the German equivalent of Gallicanism.

Against Clement’s wish, the Jesuits were expelled from Portugal, France (and her dominions), the Spanish Empire, and the Kingdom of Naples and Sicily between 1759 and 1768. Then, in 1769 Spain, Naples and France demanded the suppression of Jesuits everywhere. Clement refused to accede, but it was all too much and he had a stroke and died.

Clement XIV (Giovanni V.A. Ganganelli) was born in 1705 and educated by the Jesuits. He was made cardinal by Clement XIII (see above), who hoped he would prove staunch in the arguments against Portugal, Spain, France and Naples. These four were determined to destroy the Society of Jesus, with the excuse that it was a symbol of papal interference in their own domestic affairs. In 1679 Giovanni became Pope, succeeding Clement XIII; the latter’s hopes proved baseless because the new pope feared a great schism in the Catholic Church if the intolerable Bourbon powers were not placated. In July, 1773 he issued the Bull Dominus ac Redemptor dissolving the Society, and this suppression lasted until 1814, forty-one years. Giovanni died in 1774.