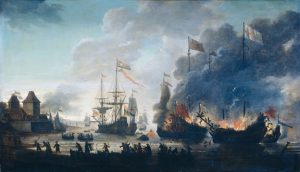 In the seventeenth century two dominating naval powers emerged, following the reduction of the great Spanish Empire and her navy. They were Holland and Britain: commercial and colonial rivalries caused a lot of trouble at sea between these two. Four naval wars were fought at intervals between the Dutch Republic and Britain from 1652 to 1784.

Historians mostly agree that the first three of these, fought in the second half of the seventeenth century had little positive result. Certainly they did nothing to give supremacy to either nation, but the fourth, fought towards the end of the eighteenth century (1780 – 84), just before ‘curtain up’ in the French Revolution, was badly lost by the Dutch, ending their claim to commercial domination. All these wars did however give a major chance to certain men to behave heroically. Four stand out – one English, the other three Dutch.

Maarten Tromp was born in 1598 and became a Dutch admiral. In 1639 he managed to defeat a bigger Spanish fleet at Gravelines, and also won the battle of the Downs later in the year. He was honoured by both Louis XIII of France and Charles I of England (1642) but had a clash with the English sailor Robert Blake in 1652 which actually started the Anglo-Dutch naval wars. He had been busy fighting pirates for some years, and perhaps mistook Blake’s fleet for buccaneers. Whatever, he was at first in winning form in a nautical conflict off Dover, but was then defeated by a superior English fleet off Portland Bill. Later he got into another serious scrape off Scheveningen, resulting in his death at fifty-three.

Cornelis M.Tromp was Maarten’s son, born 1629; he was one of the commanders with de Ruyter in the Four Days Battle off Dunkirk in 1666, and won fame and respect in battle against combined English and French fleets on the 7th and 14th June, 1673. He went to London in 1675 and was created Baron by Charles II. More honours followed, including his appointment as Governor of the United Provinces in 1676.

Michiel de Ruyter was born in 1607 and became an admiral in the Dutch fleet.He fought in all three of the 17th century naval wars (1652-4, 1665-7, 1672-8), but is best known by Dutch and British schoolboys (who like a touch of heroism and daring-do) for his incredible raids up the rivers Medway and Thames in 1667, during which he not only successfully navigated his fleet upriver and got back safely, but managed to destroy many of the British men-of-war in what their crews thought was a safe harbour. Ruyter himself referred to these incredible feats of seamanship as ‘sweeping the English rivers clean’. In the third of these naval wars he prevented an invasion of the United Provinces but lost his life in a battle against the French off Sicily.

Robert Blake was born in 1599 and came to fame as a navigator and fighting admiral late in life. In fact he was not much more than a quiet-living country gentleman until he was past forty years old, when he was Member of Parliament for Bridgewater, but the call of the sea must have been strong in his blood and bones because in 1649 he was present at a naval blockade of Lisbon, where he contrived to beat a fleet commanded by Prince Rupert (q.v.) no less. In both 1652 and 1653 he soundly thrashed his Dutch enemies, but his most resounding victory was also his last; he found a Spanish treasure fleet sailing off the island of Tenerife in the Canaries – and sunk it! For this he has always been referred to as ‘a pirate’ by the Spanish, but this is quite normal as any naval commander involved in nautical combat with the Spanish is automatically a pirate. Admiral Nelson, for example, was a pirate because he attacked (unsuccessfully) Santa Cruz de Tenerife, and of course Frobisher, Raleigh, Drake and Hawkins were all pirates. In point of fact, I think the last two named were pirates indeed, though they preferred to call themselves ‘gentleman adventurers’, or ‘corsairs’ (q.v.). Robert Blake died on his return voyage home; he was fifty-eight years old.