The end of the Terror and of Robespierre

Home/French History, World History/The end of the Terror and of Robespierre
Previous Next

The end of the Terror and of Robespierre 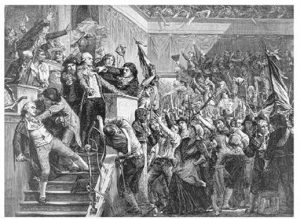 The end comes for Robespierre / wikispaces.com

The end of the Terror and of Robespierre. On 8 Thermidor (26 July) 1794, Robespierre the absolute leader of the French Revolution spoke in an unusually tactless manner to the Convention in Paris. Normally a man of caution, he ‘threw it to the winds’ and verbally assaulted his own colleagues sitting on the Committee of Public Safety (sic). He accused them of ‘conspiring against public liberty’. The outburst caused a sensation, partly because other members knew no Frenchman was safe at all, and that publicliberty was in the France of 1794 as much of an oxymoron as the phrase beautiful tyrant.

Disconcerted, Robespierre’s colleagues asked him to name the men he was accusing, but he refused. This was puzzling, as their leader had spoken of treachery, punishable by death. Members like Carnot and Fouché felt threatened, and decided it was time to eliminate Robespierre. This was an odd couple to plan such a move, as Carnot was known as a moderate, while Fouché was one of the worst of the official Terrorists.

On 9 Thermidor therefore the Convention voted for the arrest of Saint-Juste and Citizen Robespierre, a brave move indeed. Brave but foolish, as after the arrest the two revolutionaries were imprisoned in cells controlled by the Commune, or local government of Paris, packed with Robespierre’s supporters. They were of course released immediately, and the Commune itself called for an uprising in support of Robespierre, to be aided by the National Guard (mostly ex-sans-culottes q.v.).

That evening confusion raced about the meeting places, clubs and streets of Paris. The Convention had also called for the National Guard to act against the Commune. Remarkably few of the Sections – units of the local government – sent troops to help the Commune (16 of the 48), but among these were artillerymen with their weapons, which kept the Convention at bay. The Commander of the National Guard could have broken the Convention and saved Robespierre, but the latter spoiled his own chances by waiting passively for things to calm down, as they had done on numerous previous occasions. He waited in vain, and the Convention ordered the arrest of the Deputies and most of the Commune. This would mean they could be killed without defence or trial, as all this was happening during the Great Terror (q.v.). The Sections at last took notice of what was happening and Robespierre was re-arrested, much to his fury and fear. One day later he and twenty-eight others, all supporters went to the guillotine. The following day a hundred more members of the Commune followed them to the scaffold. After that the Great Terror dwindled away to nothing. Saint-Juste also died in what became known as the Thermidorian Reaction.