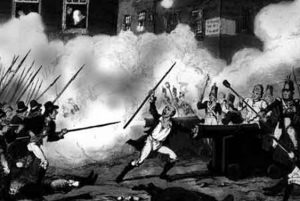 An artist’s impression of an incident in the Irish Rebellion; not the leader’s attempt to block the cannon’s mouth

In World History, the last years of the eighteenth century as opposed to the middle years, were full of unrest, rebellion, revolution and unworthy, unlawful acts. Ireland and ‘the Irish Question’ has cropped up in British history since William the Conquerer’s successful invasion of Saxon England. At all times there has been trouble brewing, or happening, in the Emerald Isle, a place of beauty and mystery. Since English kings decided Ireland belonged to them, instead of the Irish, English gentlemen have crossed the Irish Sea to quell some rebellion or other, always with the best (or worst) intentions. Like Essex and Raleigh, they failed and returned with their English tails between the legs, to face the block.

In 1798 the Society of United Irishmen attempted to terminate England’s control of Ireland, and set up an independent Irish Republic. They had neglected to remember that a couple of centuries before, Sir Francis Walsingham had invented for his queen a secret service bettered by none. English spies ensured that the British Government knew of the Society’s plans and activities. In March of that year the leaders were all arrested.

This should have paid to any possible uprising, but didn’t. The United Irishmen were in prison, and could therefore not control a popular uprising which broke out in May, 1798 – a ragged rebellion, mostly led by Catholics – aimed at Protestants and all landlords. In Wexford, the disorganised but savage rabble took control of almost all the county. In Ulster however the rebellion was largely a Protestant affair, but then the rebels heard of the predominantly Catholic nature of the rising in the South. They were crestfallen, and did not fight vigorously and were thus smashed within ten days. Dreadful atrocities took place on every side, until the rebels were routed, largely by Catholic militia at Vinegar Hill on 21 June.

Irish leader Wolfe Tone was in France trying to persuade the French to invade Ireland, and succeeded! But French forces (11,000 soldiers) did not land before the rebellion had been defeated. The place they chose for the invasion was County Mayo, and from there they marched through Connaught and broke up a British force they found in their way. But the Irish peasantry, whom Tone had assured them would rise to support them, failed to appear as promised, and the French fell into an English ambush on their march to Dublin. They promptly surrendered. The British captured a small naval fleet in October off Donegal. On board one of the ships was Wolfe Tone himself, who was sentenced to death. He cheated the hangman by committing suicide. Nearly forty thousand Irish people died in the Rebellion, though bad leadership, lack of control, lack of discipline, very little common sense, and the customary bloodymindedness.