Home/British History, History of Ireland/The Lordship of Ireland
Previous Next 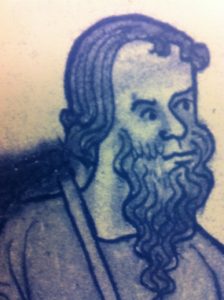 Diarmid, King of Leinster, from a contemporary drawing

A large part of the island of Ireland, mainly Leinster and Munster was under English rule from the twelfth century for three centuries.The Gaelic King of Leinster had invited Anglo/Norman barons to come with their private armies to Ireland in 1167* to expand his territory. With their help, he brought much of the south under his dominance.

Henry II, first Plantagenet King of England had learned to be wary of his barons’ undue influence in English affairs, and certainly did not wish their powers to spread into Ireland. Not being one to stand about wringing his hands, he crossed immediately to Dublin, where he re-asserted his authority with the menace of summary justice, and established ‘The Lordship of Ireland’. He would himself be the Lord, of course.

Later, Gaelic revolts curbed much expansion of the Lord’s territory, but still the Lordship covered a much larger area than ‘The Pale’ (which to those ignorant of the history of Ireland meant that part of the Lordship which lay under direct control of the administration in Dublin. In 1464 it was defined as the four counties of Dublin, Kildare, Louth and Meath).

Kingdom of the whole of Ireland superceded the Lordship in 1541 when Henry VIII declared himself King of Ireland. No-one dared to argue with this presumption, which implied a claim to direct jurisdiction of the entire island, and the claim was ratified by an Irish Parliament. but trouble lay ahead, even for a tyrant like Henry; the outrageous claim included the autonomous Gaelic principalities in the west and north, and this would lead later Tudor monarchs into bloody conflict, and numerous executions among the English ruling classes, who failed to solve the unsolvable Irish Question.

* This was the year of the birth of King John I of England.