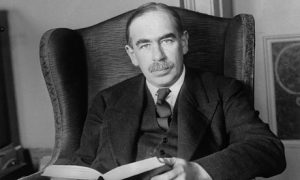 J.M. Keynes said the reparations could not be paid / theguardian.com

Even if the end of the Great War was, or at least to many people seemed to be, unsatisfactory, the victors still demanded ‘compensation for all damage done to the civilian population of the Allied . . . Powers, and to their property’. This, I suppose, is the way a World War should end, though many parts of this planet were untouched by the 1914 – 18 War. ‘Damage done to the civilian population and their property’? What about the billions spent by the warring governments on their armies and armaments. Who was to pay? The civlian population of course, through their taxes.

The victors set up a reparations commission which would decide how much should be paid by Germany. Their studies completed in 1921, they announced that 132 billion gold marks should fit the bill. This was around £6,600 millions in the pound sterling of that date. I presume the commission had inquired if Germany had (or could raise) such an astonomical sum in gold marks? Payment would be made in annual instalments.

Up stepped the eminent economist John Maynard Keynes, who wrote in a piece called The Economic Consequences of the Peace that reparations would put an intolerable strain on the German economy, and that this would make economic recovery in all Europe impossible, as Germany was by far the greatest economic power. This made sense, and Germany instantly claimed that she could make no such payment. The Allies, however, would not relent, and insisted on prompt payment of the debt, mainly because they had to make prompt repayment of their wartime debts to the United States, whose government had not been slow in taking a banker’s advantage of the European war.

Germany defaulted on coal deliveries and in 1923, French and Belgian troops occupied the industrial Ruhr (q.v.), an occupation designed, supposedly to hurry Germany up with the payments she claimed could not be paid. The result was stalemate, enormous inflation and the collapse of the mark. The politicians who had thought up the idea in the first place then produced the Dawes Plan (1924) which would help stabilize the economy and make steady payments possible. The French and Belgians withdrew from the Rhur, and Germany was able to begin again; they enjoyed a brief period of small prosperity, but this was due to American short-term loans. When these were called-in, it was seen that Germany’s ability to make payments for reparations was an unsolvable issue.

In 1929, the diplomats again produced a magic formula, this time called the Young Plan. It simply reduced the total amount of reparations to be paid by 75%, and ended foreign interference in German affairs. The reader may find this quite difficult to swallow but it happened. No-one asked why the Allies had allowed the original total sum to stand, though it was totally impossible to pay. Then, with a timing that could hardly be bettered, the Great Depression assaulted every market and payments were suspended for a year, in 1931.

In 1932, one year before Adolf Hitler became Chancellor, an international conference was held at Lausanne, with creditor nations included. They all decided to abandon reparations! Still, by this time Germany had paid approximately one eighth of the originally decided sum – around £825 million. I cannot trace any reliable facts that might lead one to suppose these payments actually reached ‘the civilian population and its property’.

It would not be too much to claim that the impossible reparations, the presence of Hitler as Chancellor, the humiliations suffered by the Germans from 1918 to 1933, their thirst for revenge and undoubted ability to re-emerge economically as a world power, combined to ensure a Second World War.