The Occupation of the Rhur

The Occupation of the Rhur 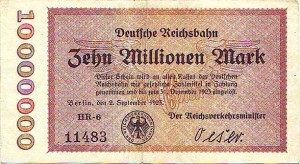 The valley of the Rhur, which would become famous enough for a major film to be made of the bombing of its dams during the Second War, was the heart of Germany’s coal, iron and steel production. The Treay of Versailles that ended the First or Great War had ordered a defeated Germany to fork out for the War, and tremendous reparations had to be paid. But how? And with what? The country was ruined by the War, and most of her machinery was destroyed or lay idle. A huge chunk of her male generation were dead, and untrained old men or boys could not run the factories or the mines. Germany therefore defaulted on her reparation payment, which should not have come as a surprise.

In January 1923 French and Belgian troops occupied the Rhur therefore, with failure of payment as an unsteady excuse. Both Britain and the United States protested, but M. Poincaré, the French Prime Minister, said that the problem was not that the Germans could not pay but that they did not want to. The two allies would therefore stay in the Rhur until she did pay, and exploit the industrial riches there too.

Not unnaturally, the Germans in Nord Rhein Westphalia were outraged, and passive resistance started up in the Rhur valley. Germans refused to cooperate in any way with the Belgians and French. The latter responded to this fairly typically, by bringing in their own workers to operate mines and factories. They also imprisoned leaders of the resistance. Germany immediately stopped all reparation payments, and the resistance became consierably less passive, as saboteurs began blowing up railway lines and stations.

As things became hotter an ex-Freikorps officer was courtmarshalled by the French Army and shot. He instantly became a martyr and a hero to the Germans. The brainless occupation of the Rhur led to a collapse of the German economy, or what was left of it, as her industry was deprived of raw materials. Nearly 90% of German coal came from the Rhur mines. Unemployment rose even higher, and inflation soared. This was the period of the million mark loaf. The German government was obliged to pay wages to the Rhur strikers. June 1923 saw a new world record – one US dollar was worth 100,000 marks, but by November this had risen to 4 billion. Chancellor Stresemann decided that these conditions could not continue: he stopped the passive or violent resistance and began paying what was due in reparations. It was a dribble, but the Rhur started rolling again, and the wretched French and Belgian troops were withdrawn to an audible sigh of relief around the world, in 1925. Germany would have to wait until 1933 for her Herr Hitler.