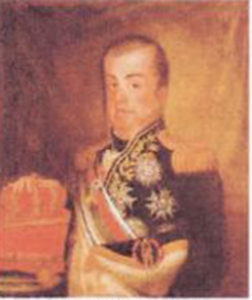 This Atlantic, south-western European country is on the western side of the Iberian Peninsula, bounded to north and east by Spain and to the west and south by the ocean. Its first kingdom came in 1139 under Alfonso I, but by the fifteenth century Europeans were beinning to talk of a Portuguese Empire, due to world exploration by Portuguese navigators and adventurers. In 1580 however, Portugal came under Spanish domination which lasted until 1640. The French invaded too, in 1807.

The first Republic was established with the removal of the monarchy in 1910, the last King being the ill-fated young Manoel. Then there was a military coup, in 1926, and very soon the country languished (?) under the Esatado Novo regime of Antonio Salazar (q.v.). He remained Dictator for thirty-five years, backed by the fearsome Pide.

Another military uprising in 1974 began ten years of unrest in the country, which suffered no less than fifteen different governments. Full civilian government was restored in 1982, and Macao, a notorious port on the Chinese coast, became Portugal’s last overseas territory in 1999, having already lost Goa, much to the disappointment of many Goans. Notwithstanding, much of the opening up of this world was due to Portuguese seamanship, guts, planning, cunning and firm resolution.

Union of the Spanish and Portuguese crowns in 1580 led directly to increasing disaffection in Portugal, perhaps because of Spanish failure to protect the vulnerable Portuguese Empire abroad. In 1640, problems in Cataluña provided the encouragement needed to a group of nationalist Portuguese to rally round the Duke of Braganza, a city in the far north of Portugal. The rebels named him King John IV, and there was an uprising in Lisbon in December, 1640 which ended with the assassination of the Spanish viceroy, de Vasconcellos, friend and confident of the all-powerful Spanish minister Conde-Duque de Olivares. No doubt Olivares would have put down the uprising in a brace of shakes, but he had a load of problems in Cataluña and they needed his concentrated attention. France however sent military and naval help. Britain, never backward when it came to irritating the French, responded by arranging the marriage of Catherine of Braganza to Charles II, known quite wrongly as ‘The Merry Monarch’ (q.v.), thus enduring permanent British help and friendship, which lasts to this day.

Spanish armies were not successful in putting down the rebellion which ended with the Treaty of Lisbon (February 1668) which recognized Portugal’s total independence at last.