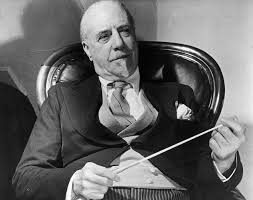 It is possible that many players in orchestras have heard very funny comments made to them during rehearsal, or even during the actual performance of an orchestral piece. But someone needed to be quick enough to scribble what was said, and this has not always happened. The following remarks were noted at the time, though critics simply attribute them to the speaker. 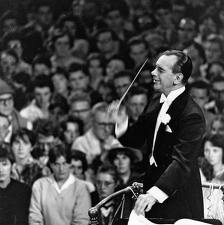 Sir Malcolm conducts the ‘last night of the Proms’ / britannica.com

Sir Malcolm Sargent took over from other conductors in the long-running ‘Prom Concerts’ held at the Albert Hall. London. Nicknamed ‘Flash Harry’, he was an excellent musician who shot up to society’s highest levels because of musicianship mixed with a good sense of publicity. In the ‘Last Night of the Proms’ every year the huge audience is always encouraged to sing or clap along with the long-suffering orchestra when pieces such as ‘The Radetzky Waltz’, ‘Rule Britannia’ and others are played – but sometimes the clappers and screechers get out of hand, and, worse for the conductor, out of tune and beat. This happened one night when I was one of the thousand or so members of the audience, standing near Sir Malcolm on his podium. The music started, with Sargent making a firm beat with his baton, but rapidly went out of control. Sir Malcolm was unperturbed. He simply cracked the baton down hard on his wooden stand and called for silence. The players slowly stopped playing, and the audience slowly stopped the racket. Something different was happening . . . and when you could hear a pin drop Flash Harry drawled, “If music be the food of love, play on, if not, SHUT UP!”

Sir Thomas Beecham (d. 1961) was quite a different class of musician, more precise, more demanding, more arrogant even than ‘Flash’. Here are some of his sayings:

“There are two golden rules for an orchestra: start together and finish together.”

(Describing his thoughts about the sound of a harpsichord) “Like two skeletons copulating on a corrugated tin roof.”

“Why do we have to have all these third-rate foreign conductors around, when we have so many second-rate ones of our own?”

(Describing J.S. Bach) “Too much counterpoint; what is worse, too much Protestant counterpoint.”

“All the arts in America are a gigantic racket run by unscrupulous men for unhealthy women.”

(Said to a female ‘cellist in his orchestra) “Madam, you have between your legs an instrument capable of giving pleasure to thousands – and all you do is scratch it.”

It is most likely that Sir Thomas, today, would not be permitted to conduct a conversation, let alone an orchestra. Leonard Bernstein, too, was given to politically incorrect utterances, but it is difficult to find them.