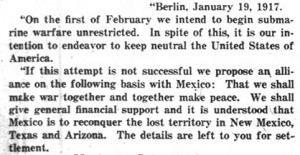 The Telegram published in the Washington Post March 1, 1917 / spotlights.fold3,com

The Zimmerman Telegram.  On 19 January, 1917, twenty-two months before the end of the Great War (1914 – 18), the United States had still not joined with The British Commonwealth and France in the munumental struggle against Germany and her allies. On that day the German Foreign Secretary, Artur Zimmerman, sent a telegram in code to the German ambassador in Mexico. The message said that should war be declared between Germany and the United States, an alliance must be made between Germany and Mexico: this would indicate the need for Mexico to go to war with the US, in order to recover what the message called ‘lost territories’; these were Texas, New Mexico and Arizona. At the same time Mexico  would have to persuade Japan to join Germany’s alliance, making war in the Pacific against American interests.

Sadly for Herr Zimmerman the coded message was intercepted by British naval intelligence, quickly decoded, and handed over to the American President and his group in February. Germany had just informed the US that it was about to resume unrestricted submarine action against all ships flying under any flag trying to reach British ports. This left Mr Woodrow Wilson in a fix, because he did not want his Monrovian doctrine of keeping away from ‘European squabbles’ interrupted; he therefore declined to make the telegram public knowledge, in case it angered the American people who might clamour for war. Mt Wilson had made his feelings clear -no intervention in Europe: but then something happened which forced his reluctant hand; three American ships were attacked and sunk without warning and with great loss of life in March. The attackers were identifiably German submarines.

Even the staunchly isolationist Mid-West rose in fury, accompanied by the rest of the United States, led by fiery jingoism (q.v.) in the press. Wilson had no choice; on 6 April Congress declared war on Germany, and the whole of Europe was able to breathe again, especially Britain, her Commonwealth, and France, nearly bankrupted of money and men by the terrible war of attrition in the trenches, and infuriatated by the arguably bad – handling of the War by the generals. With the entry of the Americans and the jolted nerves of the Mexicans, who had had no intention of trying to take back any territory, the Great War was over by November, 1918. It would not be unfair to judge that had it not been for the unconcealed threat of the Zimmerman coded message, and the frequent attacks on US vessels by German submarines – with France and Britain exhausted – the War would have gone Germany’s way if it had not been for the US President’s forced decision to finish the battle.