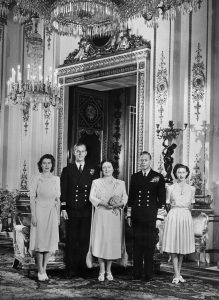 Intrigued by the title, ‘Lilibet’, I ordered a hard-bound first edition from my online bookshop Bibliophile (how lost I would be with it). I suppose it is a work of biography, in this case composed without the subject’s permission. The author is an American ‘PhD in Medieval History’ called Carolly Erickson. Her subject is the British Queen.

There is a photograph in the end papers of this authoress, who looks purposeful, and has large, white, sharp-looking teeth. In the photo she looks not all demure; rather it seems she is about to bite someone, probably in the neck: as you read her prose in Lilibet, it will not take you long to discover who. Queen Elizabeth II of Great Britain is described with loving detail as dowdy, frumpish, banal and short; she has an offputting upper-class manner, is diffident, uncaring, a bad mother, far too tolerant of her rascally, bullying, raucus, trouble-making, wayward, ill-disciplined husband who was actually poor in childhood (how intolerable this must be for a patrician American matron). Her home, Buckingham Palace, is a bastion of archaism, an unreal-world-within-a-world where tall, sleek, fastidiously dressed men walk briskly up and down the long, ice-cold corridors, carrying out the Queen’s business. The Queen’s sister drinks, carouses with ‘bipolar’ persons of inferior rank, is snobbish though trying to be contemporary, artistic (oh yeah!) and shorter even than the Queen. To cap it all, she is called Margaret Rose. What more can one say?

One can say a great deal, and Erickson says it: one can say that the Queen’s father George VI smoked (ugh!), drank too much (ugh!) was bad-tempered, stammered so much as to be incomprehensible, adored his two daughters and should never really have been King. One can add that the Queen Mother (here referred to as ‘Elizabeth of York) was extravagant, had too much influence over her daughter, was Edwardian in her approach to Education, uneducated, and unforgiving. We are informed that she never forgave a fellow American called Mrs Simpson for causing her to become Queen Elizabeth, and that she would have preferred to live the simple country life in one of her four palatial homes. She was also spiteful in leading the straitlaced, old-fashioned, starchy British ruling classes in the general English chorus against allowing poor Mrs Simpson to become Her Royal Highness Wallis after marrying dear David.

One can write that Prince Charles is a wimp, unintelligent, gauche, immoral, marrying without love, inclined to have mistresses; that Princess Anne is really a species of horse who married a commoner and only knows about horse breeding. One can say that Prince Andrew is as rascally and unpredictable as his father as well as being addicted (like him) to fast cars and women. The women are named. The youngest child of Elizabeth and Philip is sweet though, not at all the courtier; indeed, he could almost be American he is such a little saint. His name is Edward.

And so it goes on through 390 pages, acres of prose telling America how Britain has managed to dissolve into a third world power, lost her empire, fought stupid wars, lost her influence, lost her way etc., right through the reign of Lilibet. We are also told that when the Queen failed to choose R.A.B. Butler instead of Harold Macmillan (aristocratic, grouse-hunting) to be Prime Minister after Eden’s resignation, she failed to carry out her constitutional duty. Miss Erickson does admit that the Queen actually reads all that guff in her red boxes.

We are told that the writer responsible for all this manure is (or rather was in 2004) preparing a book about Wallis Simpson herself. I suppose that Miss Erickson, the paragon of American ladies’ literature, has been as fair and decent with Wallis Simpson as she has been about poor frumpily-dressed Elizabeth II. If you search around antiquarian bookshops in the salubrious streets of Georgetown, you might find a copy of this book. It is called Lilibet, an Intimate Portrait of Elizabeth II. It might have gone into several editions. It is worth every cent of the forty cents you might have to pay for it. I fear the book has failed to find a publisher in Britain.