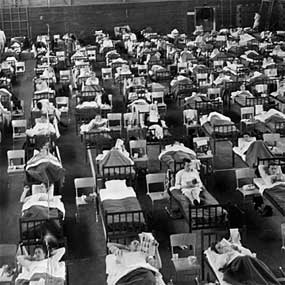 In the book of Isaiah you will find records of outbreaks of pestilence, when God is supposed to have punished the Chosen People for offences against Him. He destroyed, for example, the people of Sennacherib; but 2000 years before the Old Testament was composed, outbreaks of plague and other lethal visitations are recorded in Egyptian and early Chinese texts.

‘Plagues, pestilence, epi- and pan-demics’ have reduced the human population of this planet for thousands of years. A recent example was the Aids Pandemic, which killed enormous swathes of people of both sexes, and their children, before it was brought, somewhat jerkily, under control. In much earlier times, epidemics of smallpox, tuberculosis, measles, sweating sickness and even the common cold or ‘flu decimated populations before correct palliatives were found. Even now malaria kills, despite the discovery of penicillin especially in the continent of Africa and parts of the Far East, and many bacteria are now antibiotic-resistant.

Most epidemics were caused by the malevolent appearance of some new disease, against which there was little or no resistance. They usually arrived from somewhere else, carried by rats from merchant shipping. People could see the awful scourge approaching, and sometimes even knew from whence it came; Thucydides tells us that the disease which struck Athens around 420-439 B.C. was previously unknown and came from Ethiopia, coming to Greece via Egypt, Libya and Persia. As it first appeared in the port of Piraeus, it seems clear it came by sea.

Modern ‘flu epidemics show us how the system works – at least from the European perspective. The disease comes from far away places (Asian influenza, Hong Kong influenza etc.) and is carried across whole continents as people who have it travel abroad by air or sea. The virus then spreads rapidly among the populations where it alights. The ‘flu virus is most unstable, which must be the reason why outbreaks continue to recur. Resistance maintained against this year’s virus does not mean immunity against next year’s.

Mumps and measles killed thousands of younger sufferers even in my lifetime (born 1938), but the European population has acquired much immunity through such prolongued exposure, and infinitely better medicines.

The first recorded outbreak of plague as such happened in the reign of the Emperor Justinian around 542 A.D. Historians tell us that this plague was killing around 10,000 people per day in Constantinople, before it moved on to affect the entire Mediterranean area. The worst outbreak in European history was called the Black Death, starting among Mongol troops involved in the invasion of the Crimea in 1346. The disease spread fast, hitting Sicily late in 1347 and the Italian mainland the following year. By 1348 all France was affected and plague was appearing in all parts of Great Britain. By the end of 1350 the virus invasion had reached parts of Scandinavia, even moving backwards along the Baltic coast towards Russia. The figures are astonishing: about one third of affected European populations died of the Black Death. Some places were more seriously affected than others; Florence was very badly hit, but Milan was almost unaffected. Boccaccio in his preface to the Decameron leaves graphic accounts of the passage of the Black Death, and he also described the immediate consequence of the epidemic and the concomitant breakdown of normal social life and human conditions. But the plague did not just disappear, as many think it did, in the fourteenth century. It re-appeared again and again: in London during Shakespeare’s time theatres were closed as a basic preventive measure. Quarantining, often described as cruel, was another, especially on ships or in houses where there were victims. The Great Plague in London in 1665/6 spread rapidly into the countryside, where the inhabitants of entire villages were often locked into their farm or home.

In 1894 the plague struck again in China, especially in Canton and Hong Kong, and naturally from these seaports spread around the world once again, but this time medical science had vastly improved and the disease was mostly contained, except in India where for ten years six million inhabitants died of it. Bacteriological scientists worked round the clock studying the disease, finally identifying the causative bacillus.

The 20th century had serious epidemics too: the ‘flu pandemic of 1918/19 claimed an alleged 20 million victims worldwide, which would make it comparable with the worst epidemics of previous centuries. HIV/AIDS, at first confined in the West to certain known sections of the population has now become a devastating problem in parts of Africa. SARS (severe acute respiratory syndrome) first appeared in China in 2002, but has since spread with great rapidity, and is now considered a global problem. It is realistic, not pessimistic to accept that plagues and epidemics will continue to be a threat to human (and animal) health despite great advances in medical science.