This formed part of Adolf Hitler’s contribution to the Nationalist or rebel side during the Spanish Civil War (q.v.). The pilots came mostly from the German middle and upper classes, and their groundcrew, mechanics etc. were boys from the lower classes doing their military service. For both, flying missions in a foreign country whose government (the Second Spanish Republic) had hardly any aircraft to fight them was more like a youthful adventure than real war. The truth is that the young Germans met virtually no opposition during their lethal visits to bomb and strafe Republican Spanish towns, turning the towns into ruins and killing thousands, mostly civilians.

Historians have argued consistently since 1939 about the motivation and reality of this horribly bizarre part of a particularly horrible civil war. What, they wonder, were these men in their early twenties – some in their teens – thinking about when they flattened Guernica for instance. Was it just youthful exuberance? Had they been told by their commanders, safe on German airfields, that this was just a version of a normal family holiday in beautiful Spain, sun, sand and if they were fortunate sex? Did they know what the bombs fixed below their seats could do?

How did these boys come to be in their fighter/bombers in the first place? The authorities say that the pilots were exclusively ‘chosen volunteers’, which seems lucid enough. The groundcrew were there because they were doing enforced military service, but we are told that the men who kept the German aircraft in the air from Spanish nationalist airfields enjoyed what they were doing. There were pretty girls of course, very difficult to entice into bed because of Catholicism and family creeds, but they were there. If a German pilot had the ill luck to be shot down and survive over Republican territory, the pretty girls there would make short work of him, if they could reach him before their militia. 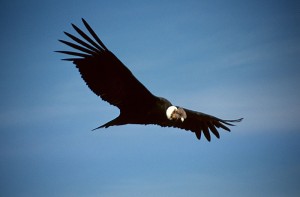 The name chosen for this squadron, or legión as the Spanish called it, is interesting in itself. The condor, as big or bigger than the albatross but unlike it, feeding on carrion, exists principally in or above the valley of the Urubamba in Perú, but is Andean and can therefore be found almost anywhere mountainous in South America. Was this a name chosen by the Germans, or was it a nickname invented by the Spanish?

The pilots who survived the Civil War (not too difficult given the circumstances) did not generally speaking survive the Second World War which followed it. For the German generals, Spain from 1936 to 1939 was a perfect (and almost safe) training ground for the Luftwaffe. The Civil War was a full-dress rehearsal and a technical rehearsal combined. For those killed on the ground in multiple assaults across Republican territory, none of this would be of interest, naturally, but for the hundreds of families which lost members to the bombing of the Condor Legion, nothing is forgotten or forgiven, and nothing will ever be the same.