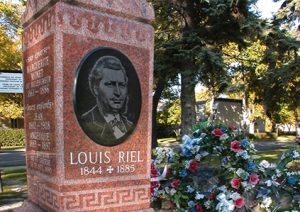 They lived an almost nomadic life which depended greatly on buffalo hunting and the uncomplicated industries that go with it, such as the curing and selling of skins as clothing for the Canadian winter. Newly arrived settlers were put off the métis by their semi-military organisation. Immigrants learned to leave them alone.

Inevitably, thanks to the Canadian government’s miserable failure to take the métis seriously after it had officially taken over sovereignty from the Hudson Bay Company, uprisings took place in 1869 and 70. The government had surveyed the land using a simplified square survey system, which nullified the métis land titles. Their boundaries were based on river-front allotments. Manitoba was settled by great numbers of white Canadians and Americans, which meant the end of métis buffalo hunting. They organised a ‘National Committee’, led by one Louis Riel, which physically prevented the Lieutenant-Governor from entering the settlement. They stormed Fort Garry and invited English and French-speaking inhabitants to enter into discussions over their rights. When some Canadians tried to resist, they were thrown into gaol by Riel, who had now become Head of the Provisional Government.

The Committee then unilaterally issued a ‘Declaration of the People of Rupert’s Land and the North West’, while the perturbed government decided to delay the passing of sovereignty from the Hudson Bay Company, which like the East India Company had professional military aid. Some of the captured Canadians got away but were caught by the métis, who judicially killed one Thomas Scott, who was in fact Irish.

News of a forthcoming amnesty arrived a few days after the execution and Riel freed the remaining prisoners, sending representatives to Ottawa. Agreement was reached with the government and the Manitoba Act was passed, granting the métis 1,400,000 acres and bilingual rights. At least that was what was supposed to happen, but Ontario’s representatives said they were going to arrest Riel for the execution of Scott; the Canadian government sent troops to capture him but he found sanctuary in the United States.

The uprisings in 1869/70 at Red River and Saskatchewan in 1885 failed, and the métis vanished as settlers living and working on their own land. They were absorbed into the new cities, and never derived any benefit even from the miniscule privileges bestowed by treaties made with Native Americans. It was, accompanied by the usual melancholy, the same old story.