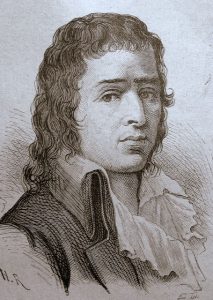 Gracchus Babeuf was one of the first communists in history, not counting almost mythical characters such as such as Spartacus. He was born the son of a poor office clerk about twenty years before the beginnings of the French Revolution. Being outspoken about his political beliefs, he was in prison during most of the Great Terror (q.v.). The problem he had with the Jacobins (q.v.) was that he believed in the Revolution but thought that it should and must secure the best of life’s blessings for all the French people, not just its surviving leaders. With the Jacobins, however, he thought that ownership of private property produced inequality and that the only way to establish real equality was to to introduce communal management of property, abolishing any private possession. As a matter of fact these ideas were more radical than those of the Jacobins, whose plan was to take all private property away from its owners by force and then re-establish it with themselves as the new owners.

Babeuf held the idea that no uprising would come about naturally, but must be prepared, organized and orchestrated by a small group of dedicated revolutionaries. This is called the ‘Conspiracy of Equals’. Using primitive forms of propaganda, mixed with organized agitation (what is now known as ‘agitprop’) important institutions like the army and the police would be persuaded to join in the uprising. After seizing power, insisted Babeuf, itr should not be turned over to an elected assembly or anything like it. A dictatorship must be formed so that fundamental changes could be made in the organization of society.

Purely Marxist historians of the last century and this see Babeuf’s opinions and theories as important, stressing that his theories passed to Louis-Auguste Blanqui in the 19th century, and then to Lenin himself. But the youth’s political ignorance and inexperience resulted in his making little impact in the actual Revolution. He plotted to overthrow the Directory (q.v.) but was revealed by a treacherous fellow conspirator, got no support from the Sans-Culottes (q.v.), norfrom the Jacobins, who regarded him as a nuisance. He was therefore arrested in May, 1796 and quickly guillotined. Poor Babeuf never learnt that it was all very well being among the very first communists, but that all true communists must learn to hold their tongue when necessary.