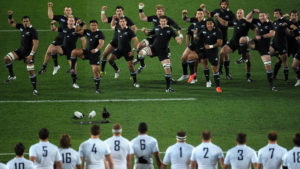 At all international rugger matches played by the ‘All-Blacks’ (New Zealand) against an arguably apprehensive adversary, the fifteen big men perform a war dance especially designed to terrify the opposite team and probably the referee too. The dance and accompanying raucus cries are Maori.

Polynesians who had migrated to New Zealand adopted the name Maori, oddly enough meaning ‘normal’ or ‘ordinary’, when they met recently arrived European settlers. The Maoris liked trading with the intruders but disliked the appropriation of their lands. In the 1840s sporadic attacks were made on European settlements and by 1854 a full fledged Maori nationalist movement started when different tribes met at Taranaki to coordinate their opposition to sale of their lands.

A Maori King was elected in 1858. He led well-built, courageous, cunning and dangerous natives who knew the land better than the heavily armed settlers, and were perfectly prepared for guerilla warfare. No less than three thousand British troops were used against them, before a truce was made in 1861. It was almost too late for the European farmers in North Island, as their farms were mostly destroyed. Then the Governor, George Grey, re-installed in his office, permitted British confiscation of three million acres of Maori territory.

Naturally, the Anglo/Maori War began again, backed this time by a religious movement – Pai marire – which means goodness and peace. This provided hope for the Maoris, and more apprehension for the fighting settlers, as the new creed combined elements of Christianity with the native religion, and the revival of cannibalism. More British troops were called for in 1868 and the settlers formed themselves into militias. The dire fighting stopped around 1872, with one thousand Europeans, British soldiers and friendly Maori dead, and rather more than two thousand Maoris killed. It was enough to destroy the Maori will to resist, polished off the authority of their natural leaders, and led inexorably to the sale of the rest of their lands. Without the native farms and grazing on which they had relied, it is said that the Maori lost their self-respect, added to the fact that the diseases the Europeans had brought with them spread throughout the native population with precious few doctors present. It was the Native American situation again.

From 1800 to 1896, roughly a century, the Maoris were reduced in number by over fifty percent.