‘The Stab in the Back’ – Myth or Reality

Home/German History, World History/‘The Stab in the Back’ – Myth or Reality
Previous Next

‘The Stab in the Back’ – Myth or Reality 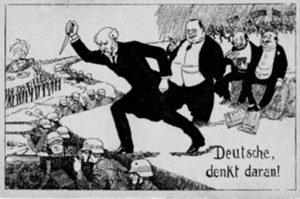 After the Normandy Invasion of 1944, the failed attempt to assassinate Hitler, and during the last few months of the Third Reich, with Russian and Allied armies closing on Berlin, Hitler gave orders to his remaining generals and field marshals that could leave no doubt in their mind; they had to fight to the last man and the last round . . . and then fight on . . .for the Fatherland!’ The word ‘defeat’ was not permitted use on any document, or on radio broadcasts. Nor were euphemisms like ‘strategic withdrawal’. Hitler was determined that no such thing as ‘the stab in the back’ of 1918 would occur again. But what was this apparently mythical stab in the back?

The Nazi leaders claimed that traitorous politicians had cheated the ‘glorious German Army’ of its ‘inevitable victory’, thus forcing it to surrender – when there was no need. That was the myth, one so powerful it drove Adolf Hitler into near lunacy, especially as it was always supported by the yes-men Keitl and Jodl, who invariably agreed with him on any subject. They were both field-marshals.

The German Revolution (q.v.) of 1918/19, it was said, had destroyed discipline and order in the army, and therefore more fighting was impossible. The Social Democratic Party, more Marxist than Socialist, accepted the terms of an armistice and agitated for peace. When all is said and done, the Great War had been grinding on for four interminable years, and everyone, including the exhausted allies France and Britain (joined only in 1917 by the United States as fresh as a new-born colt) wanted an end to it all. The SDP later signed the ever-unpopular (and dictated) Treaty of Versailles and have never been forgiven by the Germans for doing so.

The myth of the ‘stab in the back’ theory was spread by university professors, school teachers to their charges, some army officers eager to carry on killing, civil servants, mayors and leaders of the Church. Friedrich Ebert the Socialist Chancellor made a speech to the returning German army in Berlin: ‘I salute you who return unvanquished from the field of battle!’ But if they were unvanquished why had they surrendered?

The military collapse did not follow the German Revolution of 1918/19; the revolution was the result of military defeat. But the German press itself disseminated the myth, which had the effect of identifying the Weimar Republic (and its democratic institutions) with loss of the War. This led to Hitler’s intelligent use of the myth as he brought down the Republic and set about his intention of making a wholly Aryan Europe destroy the Soviet Union.

The myth of the ‘stab in the back’ is still to be found in learned German books of history.