The Blizkrieg from Nazi Germany that opened the Second War in 1939 showed that apart from tank power, air power was a vital component of Hitler’s war efforts. Germany pounded the meagre defences of Poland from the air, breaking communications, causing death and chaos on a scale not known by the suffering Poles not even during their centuries of abuse by neighbours. Dive-bombers called Stukas were used by the Luftwaffe, and a malevolent touch was added by their fitted sirens, terrorizing populations as the bombers hurtled almost vertically down from brilliant blue skies, releasing their lethal cargo at the last moment before straightening out. Many pilots, very young and with very little experience, did not straighten out, with the result that the Stuka made a bigger hole in the earth than its bombs. The efficient and very fast Messerschmidt I09 and 110 fighters attacked the ramshackle Polish aircraft without mercy, destroying most of the aeroplanes on the ground even before the pilots could climb into them. Many of these young ill-disciplined but courageous young men escaped to England, and were to take an important part in the air Battle of Britain. Assault parachutists were dropped from heavier German aircraft – a new use of air power pioneered by the Germans and quickly copied by Germany’s enemies. Parachutists were extensively used in the attack and invasion of Crete in 1941.

Between August and October 1940 the first major aerial battle was fought in the skies over the south-western ports and home county aerodromes of Britain. This was the Battle of Britain, an entirely novel conflict in which young German, Austrian, British, Canadian, Australian, South African men , average age 19 – 24 fought a duel to the death at 15,000 feet (coded Angels One-Five). Many had been at school together. If you survived and got safely back to base, the finest Summer for years awaited you as you relaxed in full fighting kit on a deck chair or in the Mess, waiting for the next ‘scramble’. As a prelude to the projected invasion of Britain promised by Goering to Hitler as an inevitable success, the Luftwaffe mounted a concerted assault on the airfields of Eastern and Southern England as part of their strategic bombing campaign. Britain had a brand new ‘weapon’ in Radar and a centralized early warning system. The pilots were enormously outnumbered, but what air forces they had could be gathered to meet individual raids. They also had the Hawker Hurricane and the Vickers Supermarine Spitfire with their tremendous manoeuvrability, high speed (the Spitfire had a 12-cylinder Rolls Royce Merlin engine that worked wonders throughout the War). Each aircraft carried ‘cannons’ and machine guns worked by control buttons on the pilot’s ‘joystick’. The Messerschmidt fighters were almost a match for them, but the slow and cumbersome Dorniers and Heinkels were not. During the Battle the sea near the Southern coast, and fields and towns was littered with crashed German airplanes. The British and Allied youths with barely three months training destroyed such large numbers of German bombers and their fighter escorts that the German invasion could never be mounted. 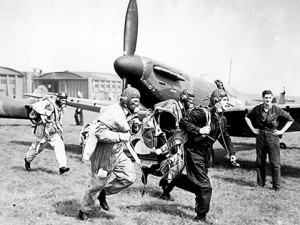 Hitler ordered instead a massive heavy bomber attack on major cities, starting with London, mostly the port area, but the mayhem rapidly became widespread. Bristol, Coventry, Clydebank, Belfast in Northern Ireland, Manchester, Liverpool, Birmingham and many other key towns were attacked by waves of bombers. This was the infamous Blitz. Windows were blackened at night, street lighting was switched off, air-raid wardens threatened citizens if they smoked a cigarette. In London people slept at night in home-made shelters if they could afford one, or on the platforms of the Underground railway system. As a 4-year old Londoner I slept with my 6-year old sister underneath a massive oaken table in the downstairs kitchen You learned to accept the loss of life, the destruction (with no insurance) of your home, the loss of your place of work, irritation by air raid wardens, lack of food, loss of water supplies, rationing and ration books, a few inches of cold water in the bath. You were cheered by Vera Lynn singing Its a lovely day . . . tomorrow . . . , Tommy Handley and Team on a spluttering radio, plus almost daily encouragement from the voice of Prime Minister Winston Churchill, and a stammering but resolute King George. You learned, with relief mixed with horror, that the Allies were paying Germany back by mounting massive day and night-time raids on strategic points in Germany and her allies – the RAF Lancaster and Wellington bombers by night, and the USAAF by day, sometimes using 1000 huge bombers in one raid. And then, suddenly, night and day were not destroyed by howling bombers, eighteen-year old airmen stayed grimly still on their deckchairs, aircrew fiddled with their equipment, and the Battle of Britain was over. Colonel James Stewart and Clark Gable USAAF didn’t have to fly missions over Eastern Germany every day and could return to ‘normal’ life as Hollywood film stars. The British, Commonwealth, Free French, Czechoslovakian and Polish fighter pilots could relax with a pint of beer in a pub with its lights on. The Battle of Britain was over. . . but the Japanese/American air battles of 1942 were about to start.